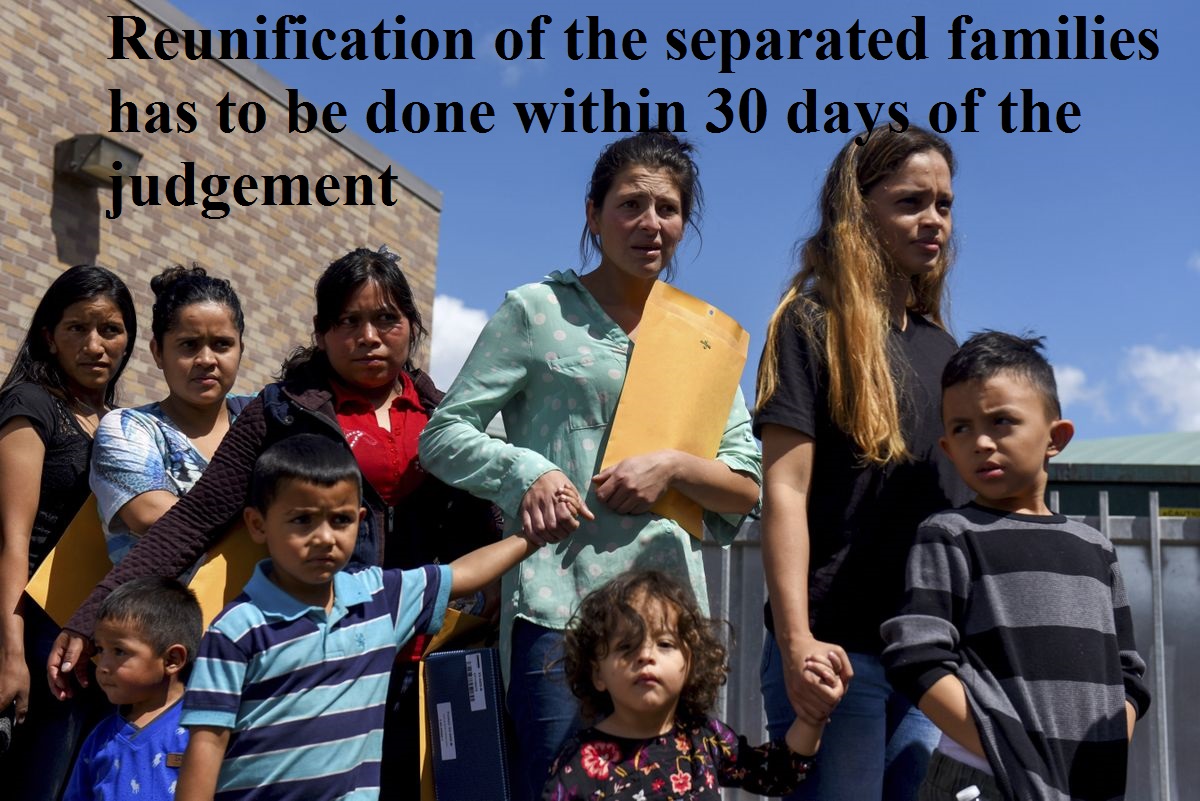 Under the impact of unhearted immigration policies like “zero tolerance prosecution policy” which led to the separation of the children from their parents at the US, borders have come to an end with a judgement given by Judge Dana M. Sabraw that Reunification of the separated families has to be done within 30 days of the judgment.

Seeing the cruelty and after effects of the separation policy, with immediate effects, Judge M. Sabraw ordered reunification. Judgment includes

After this much of hue and cry, ACLU sued the Trump administration to end the painful suffering of the separated families. But the adamant Trump’s administration even after the judgment, saying that this warning or judgment can further delay the reunification process and constantly argue on the end of the executive orders by Trump. But to counter Judge did not cater their arguments and continue with his ruling and blame the government for this chaotic consequences of the policy.

The ACLU’s deputy director Lee Gelernt said giving the priority to the timeline that government is not serious regarding the crucial timeline. He laid the main emphasis on the right of the parents and children to remain in contact and should know the whereabouts of each other.

What Trump’s administration has to say against the Lawsuit?

Trump’s administration not caring about the separated families continuously giving argument related to the delay in the process of reunification owing to the timeline and the lawsuit.

Gelernt on this said that according to him the government after withdrawing separation policy now doesn’t have any plan for the reunification as there are no details provided for the same.

Of the total listed 2300 children which are get separated from their families owing to the Trump’s separation policy, only 538 children are counted to be reunited with their family as per the report by the US Department of Homeland and Human Services.

But there found some discrepancy in the numbers provided and there is no way of verifying it. If we go as per the claim by the Government total of 500 families has been reunited but lawyers representing immigrant families through Texas Civil Right Project have received reports that are opposite of what is claimed by the Government.

Separated families are being handled by different agencies- parents by Immigration and Customs Enforcement (ICE) and children by Office of Refugee Resettlement (ORR). Lack of communication or no communication between these two agencies is making the process of reunification difficult.

Now the fight is against family detention, not family separation-

With the end of separation policy, the parents are given shelter under DHS custody for a time period in which they are questioned by the Department of Justice (DOJ) for the illegal entry. But in between the outrage of separation the Custom and Border Protection take their steps back saying it will not send parents for the questioning on illegal entry to DOJ.

So the question is what will happen to the families before reunification and after getting united? Separation policy manages to create lots of space including the military bases to keep the illegal entries but with the end of this where will the families go? The only answer to this creating facility for that 2000 and more families so that they can stay after the reunification. But till the time facilities will be ready, immigrants will be processed for the detention.

According to the 2015 version of the Flores agreement 1997, no child can be kept in custody for more than 20 days. After 20 days they have to release the children. Trump administration is on the way of finding some way to undo this agreement or override it. But the other political parties find it difficult to support as it will put the families in indefinite detention.

The questions like what will happen? What path the Trump’s administration will take? Will they take indefinite detention or any other alternative? There are more solutions than separation or detention. These questions were on the table before the trump’s ruling but now after the federal judgment, they are on the priority list.