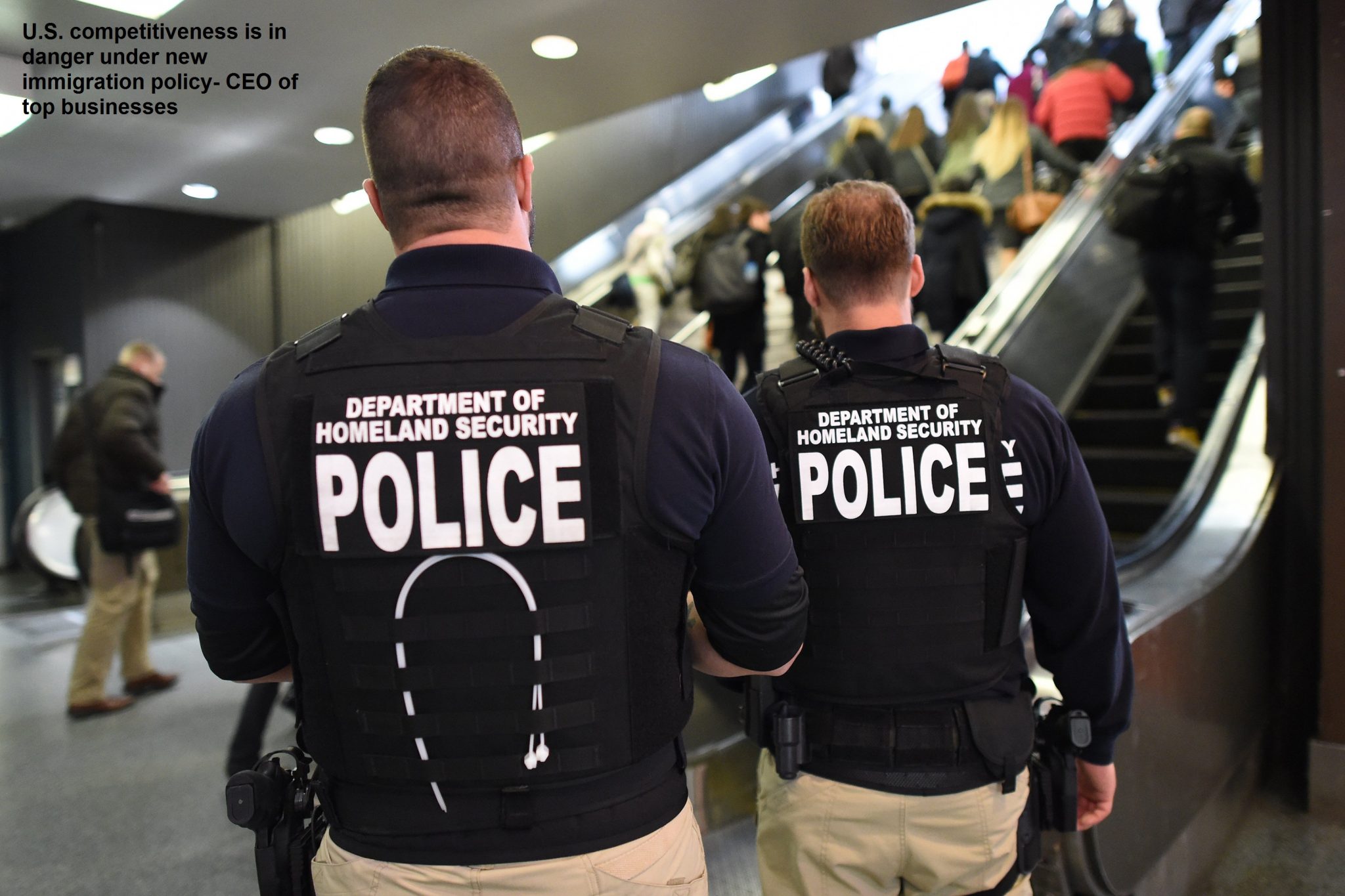 U.S. competitiveness is in danger under new immigration policy- CEO of top businesses

There is no doubt that the ongoing changes in the immigration policies are putting every immigrant in trouble. But the catch in here is this that many of the top IT and other companies have hired skilled immigrants, deportation of whom will cause loss to the company. That’s why the company’s CEOs have shown concern over the impact of the change in the immigration policy. They unitedly have written a letter to express the concern over- U.S. competitiveness is in danger under new immigration policy- CEO of top businesses.

The signatory of the letter include the CEOs of the big companies like Apple, PepsiCo, JPMorgan, Cisco, S&P, they unitedly signed the letter and sent to the secretary of the Department of Homeland Security over the concern of changing immigration policies will prove negative for the future. Changing immigration policies have put the future of many of the skilled immigrants in dilemma and to protect them companies have to bear extra cost in handling their temporary visas. These changes in the immigration policies also hamper the productivity of the company as immigrants are going through the mental stress of understanding these changes.

Companies who all have the majority of the skilled labor as immigrants have mentioned the 4 major problems that a skilled immigrant is facing. Along with that they too have mentioned that many of the skilled immigrants are having US degrees and that too in the field of the STEM. Following every procedure as per law still, they are facing uncertainty wandering over their legal status.

4 major key problems skilled immigrants in USA are facing are-

Administration, on the other hand, is blaming the companies that in order to get cheap labor, companies are giving preference to immigrants over Americans. There is a report by the Labor Department when investigating the labor trend of Cisco, that last year itself company has hired 1600 immigrants over Americans in order to do cost cutting. Though the company has nullified all the facts that have been reported saying that depending upon the position both immigrants and the Americans are being paid equally.

How Refusing Visa to Skilled Manpower impact US economy-

Business entities are ready to compromise with Congress at all steps regarding tackling the backlogs in Green Cards. But the changing immigration policies are discouraging skilled immigrants to opt the US as the destination for studies and work. With this ongoing unfairness regarding immigration policies, the skilled immigrant will choose some other country over the US when it will come down to study and work. It is an obvious scenario the skilled immigrant who will always in this dilemma that his and his family could be deported anytime will find it right to migrate elsewhere. It is true that immigrants are using public benefits but this is also true that they are paying equal taxes as natives and contributing to the economy.

The letter concludes suggesting the federal government to stop making the changes in the immigration policies that jeopardize the legal status of the skilled immigrants that are law-abiding. The troubling skilled immigrant will affect the US competitiveness.