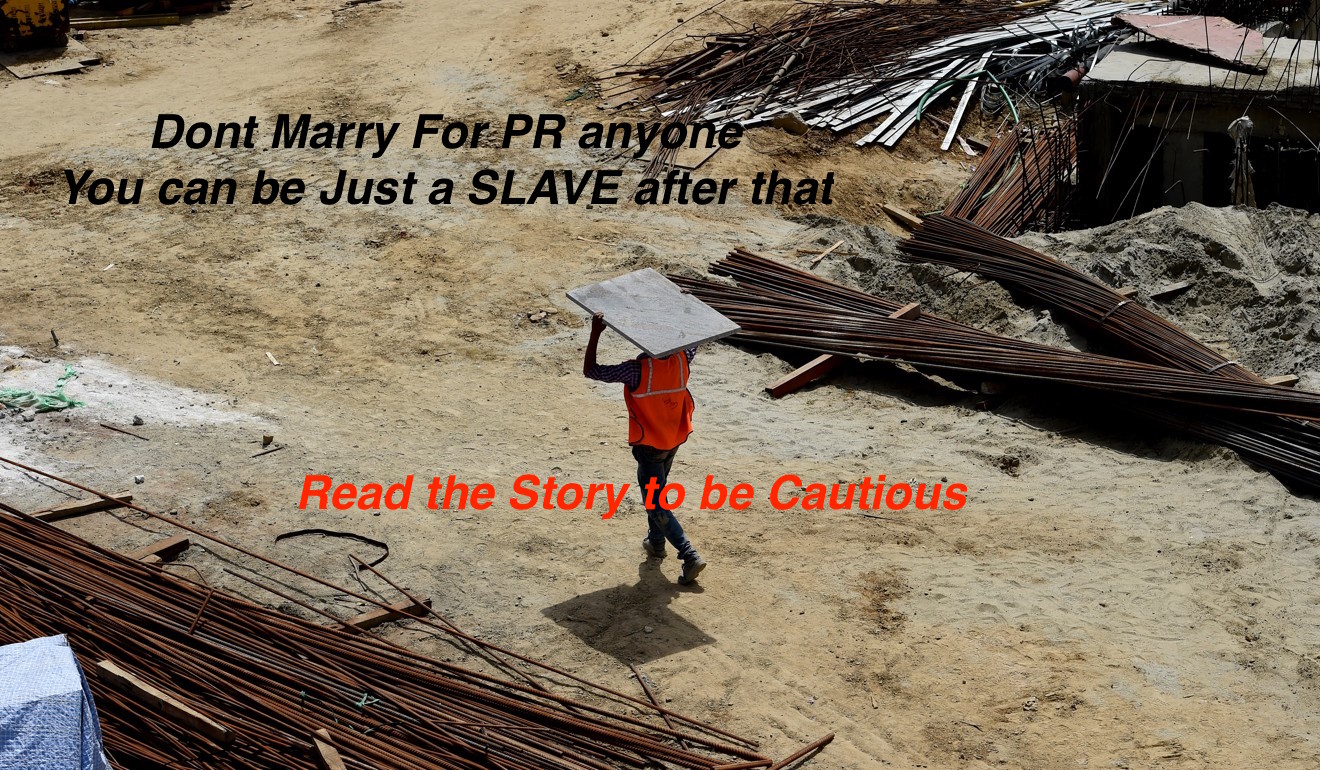 There are many men who marry for the visa or the sponsored resident status to a foreigner girl with the dream of living in an overseas country.  However, most of these men become the victim and end up as bonded labor. Many men from countries like India and Pakistan are misled into marriages for Immigration and are treated as servants by the in-laws.

There are many stories in which these men are made to work in either their family restaurant (owned by in-laws) as a waiter or bonded labor at a construction site during the day and as an indentures servant during the evenings at their in-law’s house. These men are abused physically as well as mentally. In some cases, in-laws take all money from their son-in-law and threaten him to beat to death.

Discussions in 30 Seconds hide
1 Men from countries like India and Pakistan are misled into marriages for Immigration and treated as servants by the in-laws
1.1 Girl’s family basically are looking for needy grooms so that the girl stays with them
1.2 Since such grooms are not educated enough, well mostly, they are unable to find good jobs and as such live as dependent on in-laws for all their needs
1.3 Help such grooms as they are shy of sharing their misery
1.4 Also Read- Some Pregnant Women in Canada or UK ready to marry so that Immigrants are able to get Citizenship
1.5 About Post Author
1.5.1 Diksha Garg

These men face severe depression as they are scared and ashamed to come out and tell others about their situation. It a nightmare for many as the work is usually too exhausting and harassment is unbearable.

South Asian Community NGOs and lawyers say that there are dozens of known cases in which men are trafficked to Hong Kong, once they are duped into arranged marriages. Then after they reach Hong Kong, bride’s family starts treating them badly.

Typically, the bride’s family looks for innocent men and then lure them into getting married by promising a bright future and high-class lifestyle of Hong Kong. But, once the groom reaches the foreign country, and he is isolated from his family, the bride’s family start abusing him. These men feel embarrassed to accept that they are being victimized.

Since such grooms are not educated enough, well mostly, they are unable to find good jobs and as such live as dependent on in-laws for all their needs

If anyone wants to speak for himself, he is stopped by his family from doing so. They feel it would be a family disgrace when relatives and other people would come to know about it. They rather ask him to stay in that miserable life instead of dishonoring the family reputation.

Experts say that since these grooms or rather slave husbands are from the male-dominated countries if they tell someone about their story, then people in their country would laugh at them and they will be called useless and cowards. Hence they do not pluck up the courage to say anything to any friend or family member.

In such cases, the bride’s family gets the visa processed directly rather than involving a lawyer or an agent. They want to keep everything low-profile. Around 20% of these grooms are made slave husbands.

While most of these vulnerable men are either from India, or Punjab area of Pakistan, there are some from other South Asian nations such as Nepal or Bangladesh.

This slavery is a hidden problem that is being faced by many men worldwide. However, countries like Hong Kong do not have any official records regarding any such exploitation of the grooms who migrate to the nation.

But the Social Welfare Department of South Asian countries along with many NGOs are trying to help these victims and support them with temporary accommodations and counseling.

Help such grooms as they are shy of sharing their misery

On the other hand, people from South Asian countries should be careful when a foreign family comes to their country to look for a future groom for their daughter. It may be a trap so that they can attract a vulnerable man and lure him into the dream world of staying abroad with a beautiful wife, happily.

Families of these men should also support their boy at the hour of need rather than thinking about the reputation of the family. If you agree with us, then comment in the section given below. We would look forward to hearing your idea about the whole situation.