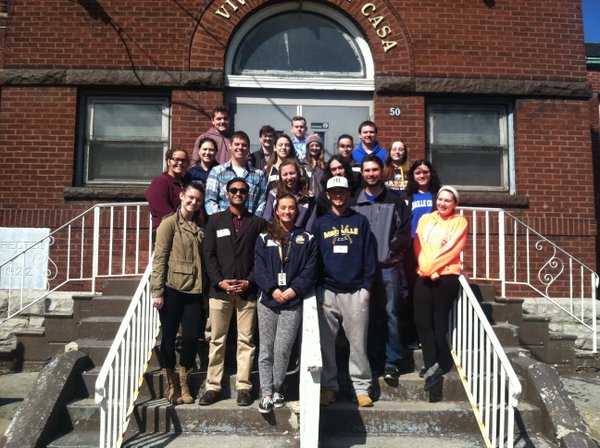 Canada immigration may be considered as a term loaded with difficulties by many. But for members of this Buffalo, New York City-based refugee shelter center, Immigration to Canada may sound easier for those Seeking Asylum in Canada.

The Asylum seekers, here also apply Canada residence and usually get their chances very quick compared with others seeking asylum from elsewhere.

Named as Vive La Casa Shelter Centre, the sheltered zone reveals a list of qualified candidates on each weekday just before noon for immigration to Canada on the basis of asylum seeking. All the 150 residents (which is the probable cap of the center) anxiously watch the bulletin board of the center hoping to see their name on the list.

Whoever gets selected need to get ready to have a meeting before Canadian immigration officers on the very next morning pleading their case that they must be allowed to stay in Canada as a refugee claimant.

Vive La Casa shelter center is run by the Jericho Road Community Health Cente. Currently, this shelter center allows roughly 2000 individuals each year. It was once known as a Catholic elementary school for those who used to wait their chance to apply for political asylum either in the US or Canada.

The current chief program officer of the center: Anna Ireland says that nowadays maximum residents apply for Canada residence as according to her Canadian regulations hear and process asylum immigration cases much earlier. Vive La Casa residents usually get the chance to get to Canada within two to three months.

La Casa allows clients from all over the world. Its entitled members come from Central and South America and Africa, alongside from those of the seven Muslim-majority based nations on Which Donald Trump is imposing the Travel ban. Ireland also stated that the percentage of Canada residence application has increased much from the US-based individuals as well after Trump’s imposition of strict law on immigration facts.

She also said that the center has been recently witnessing a dramatic hike in people looking for more information about the application process and immigration terms. She added, “They’re scared.” However, Vive La Casa center offers a step by step application process to the asylum seekers as for their Canadian immigration request.

Upon registering under the center, residents get their chance to sit down and discuss their claims with legal staffs, who support them to prepare their case properly and thereby guide them about the required documents and forms which they need to have as readily available to establish their claims at the border.

The applicants usually require a stay at La Casa for two to three weeks at an average. Although there is an exceptional candidate as well. One resident, however, has been at the shelter center for three years, caught in a cycle of denied claims and appeals.

90% of the Asylum applicants allowed on first application only

After the processing, if a number of residents are deported by any chance from Canada due to application disapproval, then they often choose to stay at Viva La Casa for another 90 days, where they again get the opportunity to re-apply for asylum. A remarkable statistics of 2015 reveals that more than 90 percent of applicants from the La Casa center were allowed to enter Canada at the first time only.

All and all, Buffalo-based Vive La Casa refugee center is a trustworthy place for those seeking asylum in Canada with the positive caption that reads “The only thing stronger than fear is hope.”