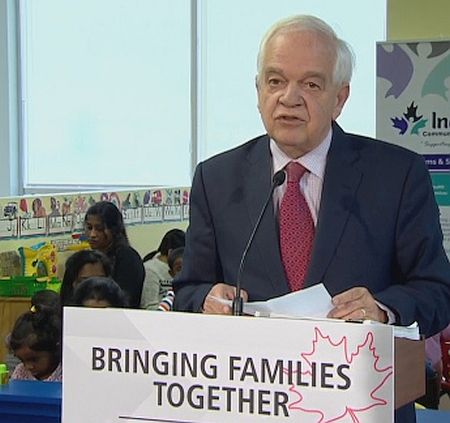 “ Canada immigration has cut family reunification processing times in half in a recent move. “

Announcing the move, Canada Minister of Immigration, Refugees and Citizenship John McCallum said that processing times for Canada family reunification will be cut in half.

Changes are part of Canada government’s consultation process for bringing needed reforms to Canada immigration policy. This was promised during the 2015 election campaign by the Liberal Party.

So, speeding up Canada family class immigration is and will be a top priority of the government’s agenda, he confirmed. Nearly $25 million has been injected by the government for hiring additional staff, McCallum stated.

Processing times may get delayed due to security checks and medical exams, he added. There is no change in rules with regard to security, health and criminality. Canada immigration offices shall be vigilant for detection and impeding of fraudulent marriages, he warned.

This will be beneficial for all Canadians since people are more productive citizens and do better when reunited with their families, the minister stated.

One Simplified application instead of two from 15th December—Come 15th December and only one application shall be needed instead of one for overseas and the other one for in-Canada applicants. A 180-page guide is now reduced to 75 pages. 14 guides and checklists are now converted to one checklist. One simpler form will replace three relationship questionnaires and one sponsorship evaluation form.

Simplified English will now replace the complicated and confusing English languages of all documents. It can be understood easily by even those whose first language is not English.