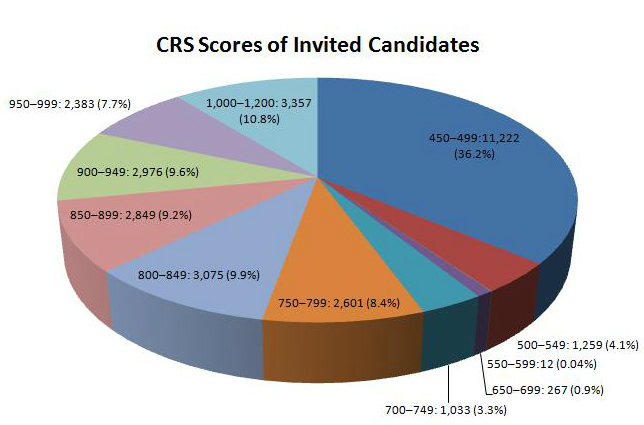 As is known to all, the Comprehensive Ranking Score (CRS) is a Canada Government’s point based system for the contenders who stand up high to meet the standards of age, skill, education, experience and adeptness of English Language and then such candidates are selected under express entry system of immigration

Furthermore, 600 additional points are given to the candidates having a confirmed job offer. Collectively, the aspirants scoring high are welcomed for Canada PR thus the foremost endeavor of CRS is to grow up the citizenship or residency of Canada.

Discussions in 30 Seconds hide
1 Comprehensive Ranking Score of Candidates selected for Invitation to Apply for Immigration to Canada
1.1 Scoring Pattern for Comprehensive Ranking Score and Invitation to Apply
1.2 For applicants without spouse or common law partner –
1.3 For applicants with spouse or accompanying law partner –
1.3.1 Also Read- How to Acquire Canadian Immigration When Self-Employed?
1.4 About Post Author
1.4.1 Akanksha

If you are willing to apply, ensure that your CRS score is at least above the minimum eligibility score. It is used to count the points in the express entry pool on the parameters of skill, language ability, work experience and education. In the due course progressively, the candidates are receiving invitation to apply (ITA) for permanent residence. The figures show that current ITA (35,973) for the year 2017 have surpassed the ITA (33,782) of the year 2016.

The fragmented figures state that ITA issued in December 16, 2016 was 1936 and rose up to 3665 up till April 19, 2017 showing an increase of around 47% within 4 months however CRS points reduced from 497 to 415; this is furthermore a low record reached so far this year. This has thus opened a gateway for wide range of candidates for becoming the permanent residents of Canada.

Scoring Pattern for Comprehensive Ranking Score  and Invitation to Apply

To elaborate more, there are few eligibility components that are necessary for immigration to Canada through express entry:

Last year in November, CRS points have led the Immigration Refugees and Citizenship Canada (IRCC) to consider having more weightage for human capital, skills and experience.  Thus, CRS points assigned for Job offer has changed from 50 to 200 from an earlier reward of 600 depending upon the type of job offered.

IRCC thereafter stated that, a reduction in points will decline the CRS cut-off and will increase ITA comparatively. Thus, the number of ITA awarded to the candidates till now (in the first 16 weeks of 2017) is much more than that of whole 2016; this, in turn signals toward Express entry as the main driver for fiscal immigrants now and in near future.

As a consequence, the candidates who were unfortunate to get enrolled in to the Express entry earlier, but have picked up sufficient points can help them step up on CRS scale to be easily a part of the Canadian race now.

Also Read- How to Acquire Canadian Immigration When Self-Employed?