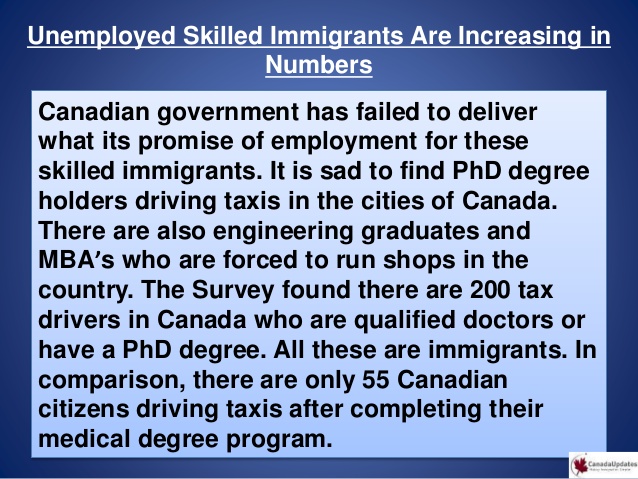 Why there is underemployment among Immigrants in Canada- What is Canadian Government doing about it?

A new solution is being chalked out by the Trudeau government to handle the aspect of underemployment among Immigrants in Canada for immigrants that immigrate to Canada for a well-settle life, but ultimately endup up without any qualified jobs which they deserve.

There are lots of people who dream of flying to Canada for a bright future. But, every time the dream may not become successful and in the case of thousands of immigrants, this is really true. Let’s see how Canadian immigrants being underemployed or taxi-drivers.

Underemployment among Immigrants in Canada- Solution by Canada Government

As per the critics, in the year 2016 around 850,000 Canadians, which constitutes of 60% immigrants, end up being unemployed or underemployed as their credentials are overlooked in Canada. Every year around millions of immigrants have to face this horrible situation. If the new solution works perfectly, then it will solve the problems of the immigrants, making their life a bit easier.

Ahmed Hussen, the Refugees and Citizenship Minister reveals about the plan in the federal budget held on 22 March. According to him, the failure of recognizing the potentials of the immigrants is not only a loss for them, but also a loss for the entire country as well.

He further added that their potential is essential towards the contribution of the country. Their contribution and skills are highly required for the growth of the country and for that every possible way has been chalked out so that immigrants can get the jobs they deserve.

It is true that the federal government still needs immigrants to take the required exams as well as fill the applications in order to prove their credentials in Canada, but the process will be much easier this time. In fact, the federal government will also provide the required financial support to the qualified immigrants who wish to work in their respective professional field. This will help individuals to survive their dream rather than giving up their career and ending up being taxi-drivers.

Pre-arrival Services in Canada to make settlement of Immigrants Easier

Pre-arrival services will be further expanded by the government to help newcomers with their licensing and certification before arriving in the country. As per the announcement made by Mr. Hussen, immigrants could now also easily apply for loans to get the foreign credentials recognized, like training, licensing exams, skills upgrading and travel.

Reports as per recent research in Canada

As per a recent study conducted in Canada, around 50,000 cab drivers concluded that more than half of them are immigrants. Again, 200 of them are doctors having Ph.D. degree as compared to only 55 Canadian-born counterparts, 20 percent having master or undergraduate university degrees as compared to only the 4 percent of Canadian-born drivers. In fact, it can be stated that ever one out of three taxi drivers in Canada belong to Pakistan or India. Only 6% of this population has stated their career in “personal, protective and transportation services”, remaining of them mostly have a background in engineering, business, architecture etc.

Newcomers generally face difficulties in Canada and cannot able to fulfill their dream of working in their respective professional field. This does not reflect the lack of education or capability of individuals, but a true reflection of bureaucratic bottlenecks, gatekeeping by professions, discrimination and language difficulty.