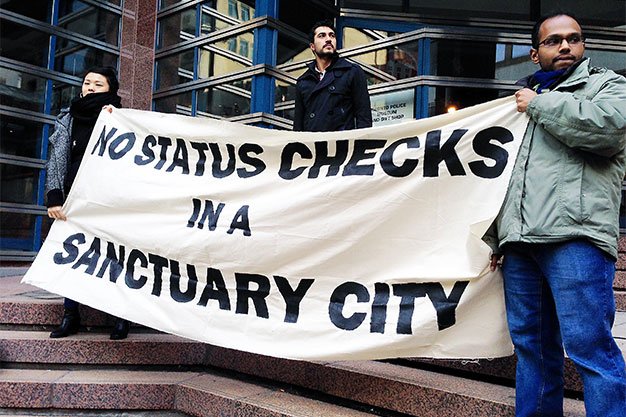 Sanctuary Cities – a safe neighborhood for undocumented immigrants in USA

Toronto was the first city among all the places of Canada to reaffirm its commitment to service and protect the undocumented migrants as being a sanctuary for them. The city got the status in 2013, much before Donald Trump’s presidency coming in force. After that, Hamilton and Vancouver were the only two cities to enact the provisions of becoming Sanctuary cities in 2014 and 2016 respectively.

Montreal’s city council voted unanimously on Monday to approve a motion which seeks to ensure undocumented immigrants are able to obtain municipal services of the city without fear of deportation. The city of London, Ontario also passed a similar motion in the last month allowing Undocumented Immigrants to avail municipal rights. Sources also suggest that Ottawa’s municipal committee will hear the public opinion next month about whether or not to obtain the status of being a sanctuary city.

The major motive of these sanctuary motions is to provide basic municipal services like housing, libraries, health support and food banks to those of the undocumented immigrants, without questioning their immigration status. However, this may seem to be easy apparently, but instances of conflicts of municipal law enforcement agencies with federal immigration officials have been witnessed many times with regards to these sanctuary’s regulations.

In large number of similar cases, the country’s police authorities have been known to share personal information, including immigration status, with the Canada Border Services Agency, as a regular practice.

Therefore, this format indicates a chance of deportation for those Undocumented Immigrants who even indulge in a minor offence like traffic violation. So, advocates are claiming that this kind of practice, discourages their undocumented Immigrant clients from coming forward even if they are witnesses or victims of their clients.

“Don’t Ask”Policy – is it an abuse of Canadian Generosity?

But this “don’t ask” policy has also seen potential backdrops too. After Vancouver police’s imposition of the same,  immigration and citizenship minister Chris Alexander addressed it as an abuse of Canadian generosity. Some official even feared that the actual imposition of “don’t ask” regulation will give rise to illegal immigration in the country to an uncontrollable level. But non-status migrants’ advocates are seeing this as a welcoming move for safeguarding the undocumented Immigrants.

They say that the non-status migrants will get their chance to enter the country safely and securely after crossing the borders just with their personal identities, without having legal immigration papers, if they get the cooperation from the police departments of these sanctuary cities properly under this “don’t ask” regulation.