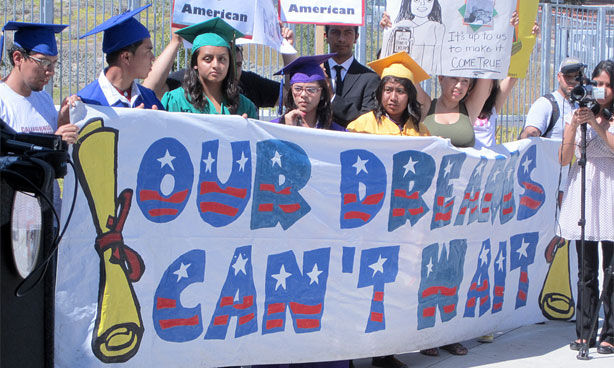 It is just the beginning phase of Trump’s rule in the White House, but it seems that strong differences have already started emerging among the new President’s advisory committee members on whether to revoke the policy made by the previous Prez Obama which protected young immigrants from deportation.

Even though Donald Trump focused his election campaign on the stronger imposition of immigration policies by refusing all executive terms implied by Obama on the same. But the Republican leader seems to rethink to order safeguarding, a group of somewhat 750,000 people, well known as “dreamer” immigrants, who were brought to the United States illegally as children.

The subject has now turned into matter of intense debate with White House advisers divided into two parts as one with the chief of staff Reince Priebus, who public stressed Trump’s discretion for attending the matter alongside the congress to derive a long-term solution to it.

Whereas, on the other hand, Stephen Miller along with Trump’s nominee for the United States Attorney General, Jeff Sessions and Steve Bannon, Ex-chief of right-wing Breitbart News, together stretched Trump’s attention for some harder approach on this matter simply by paralysing the renewal the authorizations of dreamer immigrants’ right to to work, drive and obtain higher education in the U.S.

As per a senior Republican official from the house, it is still not certain whether the administration has finally taken down any chance of overturning Obama’s policy for Deferred Action for Childhood Arrivals (DACA). Some experts have even seemed to portray this term as an important subject for reconsideration under Trump’s decision of US-Mexico Wall over certain negotiations, health care measures, infrastructure investments, and tax reforms.

Another concept developed recently relating to decision on Dreamer immigrants is over a proposed Senate bill sponsored by Dick Durbin from the Democratic side and Republican Lindsey Graham. This bill focuses on protecting these dreamer immigrants as the “sugar that would help the medicine of the wall go down”. Though the bill is likely to lack a number of votes for its official passage in the house and certain amendments in it may turn it less support worthy to the Democratic party.

Also Read: Trump to add restrictions to US H1B, L1 Visas to prevent their misuse

However, Donald Trump also seems to reassess the DACA terms urgently and seriously as, in a recent interview with ABC News, he mentioned current insights about his administration’s preparation of new policy to tackle the matters of “dreamers” in next four weeks, further marking: “They are here illegally. They shouldn’t be very worried. I do have a big heart. We’re going to take care of everybody. We’re going to have a very strong border,” and denying Durbin’s all worries for an executive order to overturn Obama’s past decision for the same.

Now a portion of Democrats and other citizens of the United States have started believing that no matter what happens, Trump’s will be strict to cast the DACA terms from now on wards. Although, the speaker of the house Paul Ryan assured a woman who is protected by DACA Act that proper protection will be provided to avoid their sudden separation from their families living in the country, some immigration experts and advocates are seeing this in different light

According to them, both the persons Miller, who is already well known for restricting immigration terms and Bannon, Trump’s senior counselor and chief strategist respectively are expected to be harsh on immigration measures for DACA protected groups and may impose new reforms and codes for these dreamer immigrants to stand on Trump’s campaign promises by proving Pual Ryan’s prediction absolutely wrong.

Therefore, in the current context, it is better for those immigrants, who fall under DACA, to be prepared mentally and lawfully for any kind of conditions or situations.

Also Read: Fear of Deportation haunts illegal Immigrants in US as Trump’s term draws near