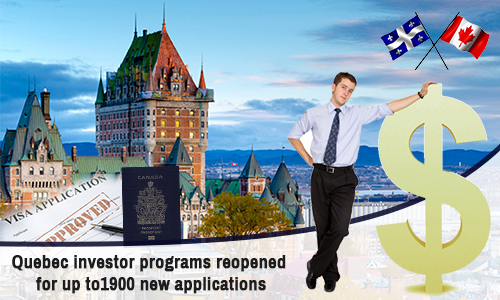 AS uncertainty engulfs the fate and status of the EB-5 immigration scheme to the United States with Donald Trump occupying the chair of the US president, Quebec is all set to open applications towards its various popular immigration schemes. Let’s delve a bit more into the Quebec Immigrant Investor Program.

The Quebec Immigrant Investor Program extends a well-administered and stable option to the US EB-5 immigration scheme. Presently, the said immigration scheme to the US is suffering an extensive problem with manipulation and fraudulence of the targeted areas for employment and hence, the backlog of the pending application is constantly accumulating. As such, if you are planning to settle on the North American soil with a rewarding career, QUIIP will be a worthy alternative to consider.

The Quebec Immigrant Investor Program has not undergone a rise in the requirement of the investment amount in a span, spanning over a decade. In the opinion of the experts, it is expected that the prevailing rules and regulation will stay unchanged at least for another term.

On the other hand, even if the US EB-5 immigration scheme has changed the same for the requirement of the investment amount, since its inception in 1990, the scheme has undergone several changes. It has been for the reason that the lawmakers in the United States attempted to reach a consensus on the points that they want to accomplish with this program that has been popular yet highly controversial. On that, the recent controversies related to the manipulation and backlogging of the applications has further damaged the popularity of the US EB-5 immigration scheme.

Assumptions and forecast by experts suggest that the newly elected US president will be supporting this scheme as it fetches billions of investment to the US soils. However, till date, Donald Trump and his team are yet to give any indications for similar intention. Thus, the fate of this scheme, for the time being, is engulfed in dark clouds. On the other hand, the government of Canada has been successful to convince the aspirants about the transparency of the QUIIP scheme and hence, this program is gaining momentum in terms of its demand.

A recent research suggests that factors like transparency in the application processing, the requirement of relatively low investment amount as well as the stability of the investment make the Quebec Immigrant Investor Program scheme one of the most sought-after immigration program among the high net worth people.

The Quebec Immigrant Investor Program will open up a highly potential domain before the investors that promise the optimal return on their investment. Hence, the rising demand and popularity of this program seem justified and practical.