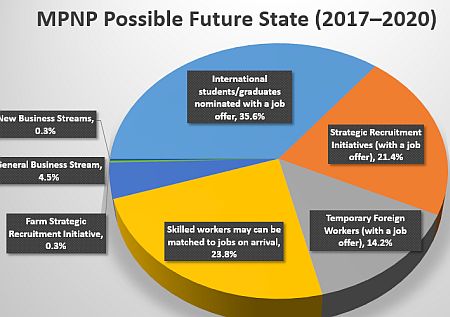 Canada , 23rd December: Aspiring immigrants to Manitoba will be thrilled to hear about Manitoba immigration strategy for 2017 and the changes incorporated there in.

—Government of Manitoba has unveiled a new Labor Market Strategy for the year 2017. This has been done through MPNP(Manitoba Provincial Nominee Program). Manitoba is very popular immigration destination for newcomers. That’s due to increasing job opportunities along with a higher living standard.

Nominees to be matched with Priority Requirement- As per the details, the new immigration strategy of Manitoba shall match nominees with priority requirements of labor market. So, it will be nominating skilled workers having a job offer on a priority basis, but it shall also nominate some even without any job offer too. This group will be matched to employment after they come to Manitoba.

What is the need for new Manitoba immigration strategy?—The new immigration strategy of Manitoba is released a couple of months after a new government took over in this province in April 2016. There is an ongoing requirement for immigrant skilled workers having occupation-specific and sector-specific skills. This is as per the Labor market estimates for 2016-2022. There is also a requirement for entrepreneurs wiling to set up businesses leading to job creation in this province.

Majority of job openings shall need workers having skill-sets and training for the jobs in Manitoba. The sectors that are predicted to have highest demand are business and finance, traders and transportation, health, and sales and service.

Manitoba wants to move MPNP to make it a demand-driver model on the basis of performance assessment and better labor market details.

Other upcoming Manitoba immigration changes in 2017—