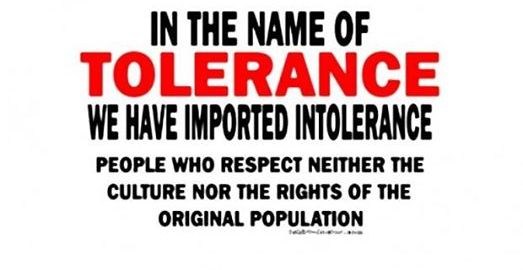 Have Immigrants in Canada imported Intolerance in Canada?

Seems like anti immigration sentiments are here to stay. The Anti Immigrant sentiment in UK is understandable as the land mass is lesser, no industries and whether you agree or not, UK is one of the Most Color Conscious Country.

However, the countries like Australia, Canada and USA, where there are huge requirements of new population to join in view of the aging population and to develop new territories, requirement of professionals in many fields as Medicine, Agriculture sector, this anti immigrant sentiment is not easily understood, unless we go a little deeper.

The Party has been registered on Oct. 7. Salzberg, the promoter of the party, justifies the party objectives in lines with the growing frustration in minds of people across Europe and North America saying that they have had enough due to politically correct policies which have failed to address the core issues of growing unemployment, housing un-affordability due to immigrants investment in real estate, Immigrants not landing and staying in the stated province (Such as PnP for Quebec and then moving elsewhere after landing)

The Cultural Action Party claims to have active support base of 5000 followers in Social Media and promises to bring radical reforms in Immigration Policies, Multiculturalism Act and Temporary Foreign Worker Program

In short time, since he has floated the party; he claims support of more than 50 active workers and a strong force of 6000 and counting supporters in Social Media across the country.

1. Growing unemployment, especially the immigrants from Asian Countries, have no hesitation to work extra hours and thus are able to grab jobs from Canadian born workers;
2. The new immigrants take lot of time and many still do not assimilate in Canadian Culture. Canadians of European descent are so concerned with this that they do not prefer to stay in localities largely inhabited by Asians Immigrants. In Surrey, British Columbia, you will rarely see a Canadian from European descent.
3. Immigrants not respecting Canadian Values- The per capita percentage of offences like tax Evasion, non observing of traffic rules, drunken drawing are much higher among Asian immigrants as compared to others
o