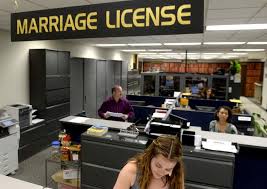 Louisiana makes it illegal for foreign born persons, undocumented immigrants to get married in State

Seems like Anti Immigration feelings are here to stay and it is sinking t new lows every day. Louisiana is new example in this regards.

In this state, hitherto little noticed, it is illegal for any refuse or illegal immigrant to get married. Last year, the state had banned gay marriages, the case against which it had lost in the court. Not deterred of having lost the case, the state passed the law that any foreign born person before getting married has to produce unexpired visa and birth certificate.

This has been done to avoid any mischievous element, undocumented worker or terrorist may not try to get settled in the state by getting married. It may be noted here that the federal courts have ruled that marriage licenses cannot be denied on basis of immigration status.

Why the state has insisted for birth certificate is not understood.

There are many cases of couples living together, having as many as three or four children but they have not been able to get the marriage license. Louisiana laws don’t recognize common law marriage. Due to this law, many couples living as married couples, and calling each other as husband and wife are now more legally recognized as couples.

As a result many spouses are unable to avail the health care benefit available to them per health care plan taken through their employer. In many cases, where such couples approached courts, they were turned away since the laws did not favor them

The refugees having green card are no better. They need to produce date of birth certificate, which neither they have nor in a position to go back to their home country to get the same