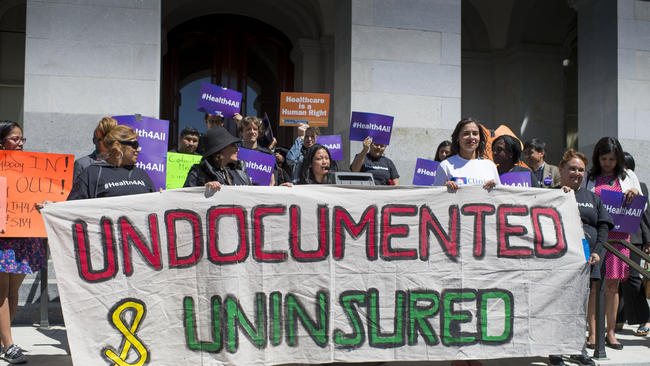 California may introduce a scheme for Healthcare for Undocumented immigrants

Offering a compassionate solution that makes economic sense too, California lawmakers have suggested Obama Government to introduce a plan under which undocumented immigrants can have access to health insurance coverage. If approved, this will benefit 30% of the approximate 2 million undocumented immigrants in the state who at present have to buy expensive polices with limited coverage.

Currently, undocumented immigrants cannot access “Obamacare” coverage under Affordable Care Act. The lawmakers have suggested this under provisions of Affordable Care Act that provides that states may experiment with approaches to cover the residents. Often these immigrants, land up in emergency room of the hospitals to get treatment at the cost of other tax payer’s money. With this coverage, they would have access to preventive healthcare benefits that would ultimately reduce the healthcare costs.

If approved, some other States may also follow this model.

The proposal is to be voted by Department of Health and Human Services and the Department of Treasury and if it gets passed, it would be a win-win for state residents.

While the undocumented immigrants would have access to good healthcare, the health department too would be able to add to its strength and offer better services.

As the recent survey by Wall Street Journal reported that out of 25 countries having large number of undocumented immigrants, 20 of them were offering Lab facilities, Doctor’s visits and preventive medical care. Good healthcare for the residents would also mean healthy environment of other residents too.

The scheme has its share of critics too- They question, what is other states do not offer similar benefit? Would this not make California haven for more undocumented immigrants?

However, those in favor of the scheme argue that other states cannot afford to bear the medical costs of the undocumented immigrants out of tax payer’s money for long and ultimately, they too would have to adopt such schemes.