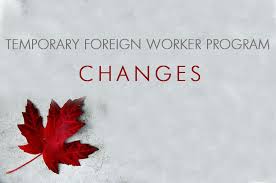 In view of mounting reports of exploitation of temporary foreign workers as they are not being paid committed wages; are forced to live in inhuman conditions and are always threatened with deportation, the Canadian Government had set up a Parliamentary committee which has suggested some major changes to the present temporary worker program.

Some of observations and recommendations of the committee are-

1. Not tied up to single employer– As the committee observed that this creates a power relationship which is open to abuse by employer. New rules would make it easier for a worker to move from one employer to another.
2. Trusted Employer Status – Track records of employers would be maintained and applications of those with good track record would be fast tracked
3. Not to be forced to leave after 4 years– Temporary foreign workers would not be forced to leave Canada after expiry of four year period of employment.
4. Fee for LMIA of $1000 is unaffordable for many categories of immigrants such as caregivers. Their work permit to be increased from one year to two years.
5. Temporary foreign worker scheme streams to be rationalized keeping in view the industry requirements. Farm workers, Construction and Real estate workers, Caregivers are likely to get high weight age
6. The applications to be processed much faster. Applications from trusted employers would be processed even faster;
7. Vacancies of permanent workers may not be made open to temporary foreign workers program
8. Transition Plans– Employers to share transition plan to show that their reliance on temporary workers would be reduced over time
9. Appropriate training programs be introduced to ensure that in future Canadians are equipped to take up these jobs
10. ESDC to improve labor market data collection processes
11. Employer specific permits system to change to stop power imbalance and abuse by employers
12. Multiple entry work Visa to be allowed to Temporary workers to allow greater mobility and to allow workers to enter and leave Canada
13. Action Plan for Permanent Resident Status be made for all Temporary Foreign Workers to enable them get citizenship after having worked for specified number of years
14. Information sharing by Provinces to be increased to ensure immigration and nominee programs to function in collaboration with one another.
15. IRCC to amend the Immigration and Refugee Protection Regulations and to amend the “cumulative duration” rule, which currently makes certain workers ineligible for new work permits if they have been working in Canada for four years and bans them from applying for a new one for an additional four years.
16. To allow for fixed-term employment contracts to be allocated the same number of points as permanent work contracts, where there is a strong likelihood of continued employment.
17. Increasing the frequency of on-site inspections and ensuring that they be conducted in presence of temporary foreign labor being on work;
18. Establishing a dispute resolution mechanism for migrant workers when conflict with an employer arises;
19. Guaranteeing that any workplace injuries that require immediate attention be granted emergency care where deemed necessary in Canada.
20. To ensure that incoming migrant workers and their employers are informed of their rights and responsibilities under the TFWP, including dispute resolution and abuse reporting procedures, as well as information on wages, benefits, accommodations and working conditions; and that the Department undertake best efforts to provide this information in the language of preference of the migrant worker.

Canadian Minister of Immigration, John McCallum, and the Minister of Employment, Workforce Development and Labour, MaryAnn Mihychuk, have promised to respond to the recommendations within the timeframe of 120 days.