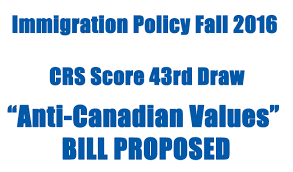 In second draw in a row, the CRS score, Comprehensive ranking Score, as required by a candidate to get invitation to apply has come down. As a result, in second draw in a row, large number of candidates received invitation to apply. These candidates are now to make the formal application for Permanent residency along with their family members (Spouse or dependent children) with requisite visa fee and can look forward for visa in next three to six months.

In recent draw on 21st September 2016, as many as 1288 candidates were selected for invitation to apply with the minimum CRS(Comprehensive Ranking Score) falling to 483.

CRS Scores coming down beyond expected numbers- In the beginning of the Express Entry System of Immigration, getting ITA at this score seemed impossible.

Prior to this, in the draw held in August 2016, the CRS had fallen to 538 with 750 candidates getting invitation to apply. This fall in CRS is probably due to IRCC to meet its target quota for taking immigrants which with the stringent norms of having prearranged employment in Canada seemed impossible. Many candidates could get the required CRS with the Provincial nomination support.

Does this mean ray of hope for other candidates who did not get ITA even in this round? May be yes. New rules of immigration are likely to be announced by end of November 2016 and by that time at least three rounds of the draw are expected

Though nothing can be said for certain, at this rate, seems that the coming draws could see the CRS falling to 400-425 levels. If you intend to apply for immigration, and have score in this range, do keep your papers ready and it is quite likely that you may get ITA with this score.

What would be fate of candidates in next rounds of draw? Even if any candidate is not able to make it in these upcoming rounds of draw, the new changed immigration policy for 2017 is expected to be even more liberal. The home work done at this stage for getting ITA may not go waste and it will be good if the candidate is in pool