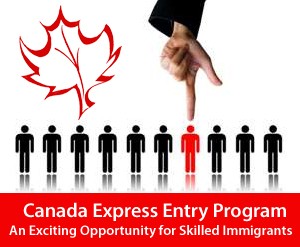 From the 1st of Jan 2015, the new Canadian immigration policy called the Express Entry System has come into effect. This in effect would work as a Job Bank where aspiring applicants can register themselves into a common list from which prospective employers can choose them according to their specific skills.

This new system will help in balancing the influx of skilled workers according to the specific market needs. It will also ensure the proper distribution of the workforce across the region. Unlike in the past when the candidate could apply for a suitable line of job and chose where to settle down.

Discussions in 30 Seconds hide
1 Being Ranked
2 Additional Points
3 Being removed from the List
4 PNP and Express Entry
5 About Post Author
5.1 Binny Kuriakose

It would be a single list of chosen candidates who will be ranked according to their potential based on a point based system called the Comprehensive Ranking System. Candidates can improve their ranking by updating their profile as and when they achieve any additional criteria required. You can also go down on the total ranking when other candidates better theirs with extra additions. So, getting on the list by meeting the minimum requirements is only the first step. Maintaining or even improving your ranking is more important as that increases your chances to be selected by a prospective employer.

Based on the combination of skills available, a candidate can earn 100 extra points under the “skill transferability” category.

Though climbing up the ranking be earning maximum points should be the primary aim of a candidate, one should not forget that getting on the list is something that is equally important, without which there is no ranking.

So a candidate who has a provincial nomination and is also listed on the Express Entry pool with an additional 600 points will be given an invitation for permanent residence.