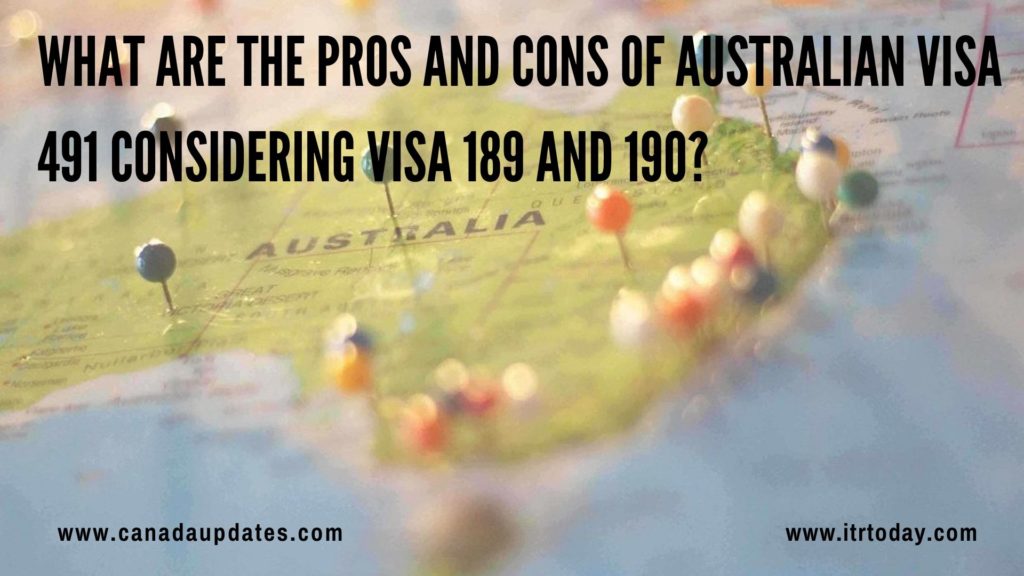 Visa 491 is better for the skilled workers who are willing to settle permanently in Australian regional areas.

With the introduction of a new Australian subclass visa 491, it is easy for the skilled workers to stay and work in the regional areas of Australia except in Sydney, Melbourne and Brisbane.

However, immigrants need to know that visa 491 came with some pros and cons. Individuals should also take into consideration the visa 189 and 190 while understanding the positive and negative aspects of visa 491.

Last year, on 16th November 2019, a new subclass visa 491 came into existence with the main aim of allowing the skilled workers to stay and work in Australian regional areas other than Sydney, Melbourne and Brisbane.

However, everything comes with some merits as well as demerits, and visa 491 has too. Moreover, we should take into consideration the subclass 189 and 190 while understanding the positive and negative aspects of visa 491.

As the government of Australia set the rule for migrants who wish to apply for new regional visa 491, that these migrants are required to stay and work in the allotted regional areas of Australia except in Sydney, Melbourne and Brisbane.

Consequently, it will help the immigrants to stay in satellite cities such as Wollongong, New Castle and many more.

Another benefit of this visa is that it gives medicare benefits to the 491 visa holders. As a result, it will lower the cost of living in these places.

The Australian government has added some critical rules on the visa rulebook, which is mandatory for those who wish to get the Australian PR.

One rule is that you need to stay in the designated regional areas for at least three years to be eligible for Australian Permanent Residency (PR).

Besides this rule, as a regional visa holder, you must earn a minimum of AUD 53,900 per year for three consecutive years to meet the income threshold criteria.

What Does the Research on Skilled Immigrants Say?

According to research by the University of Adelaide conducted by Andreas Cebulla and George Tan, skilled immigrants in Australian regional areas are not getting suitable jobs as per their experience and skills.

The research revealed, there was a significant difference between the requirements of the regional labour market and the skills possessed by the immigrants, which further leads to the discrimination faced by the expatriates from their employers.

Moreover, the discrimination is not only extended to work areas but also to the living spaces where immigrants are discriminated based on their culture, religions, language background and many more.

If we talk about visa 189, it is an independent visa for those immigrants who are not sponsored by the state or territory or by any employer in Australia. According to this visa, applicants are independent to stay and work in any part of the country.

Similarly, visa 190 is a state-sponsored visa for those immigrants and skilled workers who have been either nominated by the state or territory government to stay and work in the designated areas in Australia.

However, visa 491 is different from the other two visas(visa 189 and visa 190) in various perspectives. Wherein, subclass 491 visa is a provisional, point tested visa provided to the expatriates who are nominated by the close family members living in the Australian regional areas. The main aim of this visa is to drive the people from the Australian cities to the local areas.

As per the eligibility and other criteria, subclass 491 is quite competitive than visa 189 and visa 190. It is temporary as it doesn’t allow you to live permanently in Australian provinces.

Should a Skilled Worker Go for Visa 491?

The newly introduced visa has both positive and negative sides. However, visa 491 is better for the skilled workers who are willing to settle permanently in Australian regional areas as it provides some additional benefits (medicare, cheap schooling and others) to the visa holders if compared to the other subclass visas like visa 189 and visa 190.