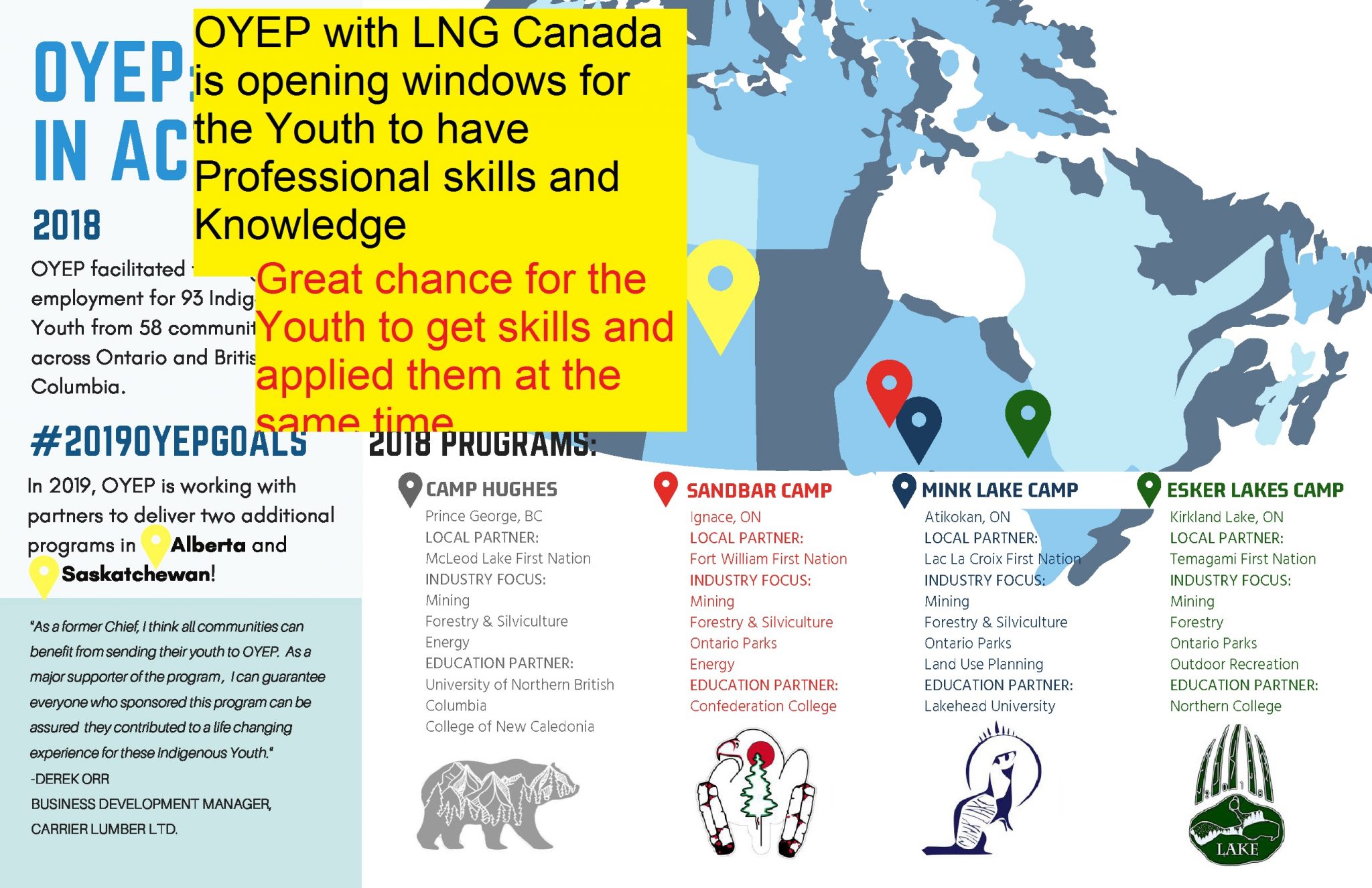 Outland Youth Employment Program(OYEP) as it is popularly known in Canada has been a revelation of sorts for the youth as well as the nation which was in some way or the other struggling to find ways to employ youth stuck in the suburban areas of the country. OYEP-a Way of Linking the Talent with Requirements- Read to more about the Project.

Discussions in 30 Seconds hide
1 OYEP-a Way of Linking the Talent with Requirements
1.1 OYEP a Leading Opportunity for the Youth to Gain Professional Knowledge-Susannah Pierce
1.2 OYEP- Window to the Outer world- Derek Orr(Business Development Manager)
1.3 Ending Lines-OYEP with LNG Canada surely help the Program to reach every Youth of the Nation-
1.3.1 About Post Author
1.3.1.1 Diksha Garg

OYEP-a Way of Linking the Talent with Requirements

In the inaugural run of the summer of skills training and personal growth initiatives in the year 2018, it called 20 youth representatives from over 16 first nations of the region. The training went on for six weeks which garnered a positive response owing which LNG Canada made an announcement on Thursday about continuing being the sponsor for three more years for OYEP West. It is noteworthy that LNG is also one of the founding members of OYEP.

Susannah Pierce, director of external relations for LNG Canada, was present on occasion and he praised OYEP for its outstanding programming and significant opportunity creation for the indigenous youth. He added that OYEP had given result in the past, so they have no hesitation in giving the support again in the year 2019. It was the vision of Derek Orr, business development manager at Carrier Lumber and a former elected chief at the McLeod Lake First nation that subsequently led to the opportunities for the aboriginal youth far outreach of the professional advancements in the industrial sector.

Derek Orr believed that OYEP has a structured environment that provides the youth a chance to interact with fellow peers, learn skills and gain exposure in the industry. He appreciated LNG Canada’s decision to fund the program for three more years and believed that their decision would have a positive impact on the agenda. OYEP includes various factors of the industrial development coupled with the requirements of the indigenous youth making the need of one into the requirement of others.

One of the individuals involved in the inaugural run of OYEP Karrissa Brown of Ts’il Kaz Koh First Nation said, “It was an amazing experience, and we learned a lot of valuable skills and lessons through the program. I think everyone should get a chance to experience something like the OYEP camp.” Although the Sponsorship from LNG Canada is sure to help the program immensely but along with this many more sponsorships would be required to which Orr is hopeful and working in the same direction.