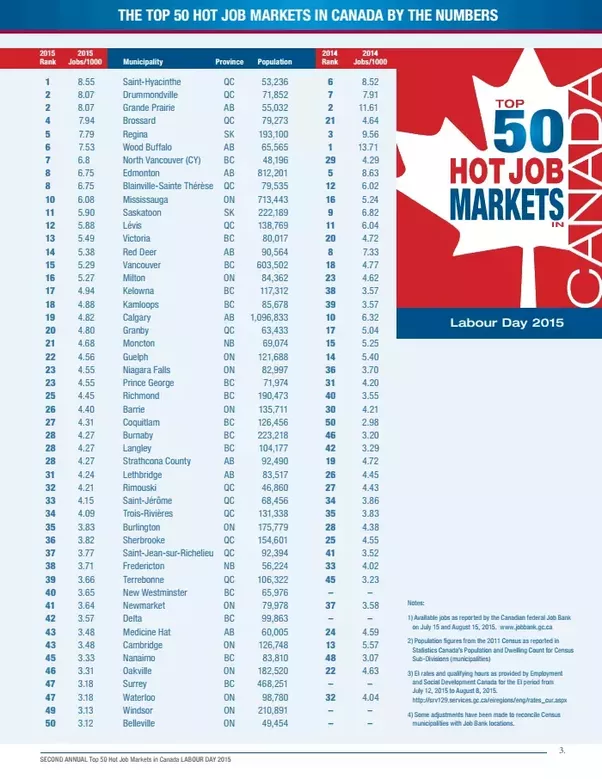 Having a job is the key ingredient to having pleasure in life. This not only ensures a safe, healthy and stable future but also gives you a scope to enjoy some extra amount of fun in life. So, if you are looking for some kick start to your career, then it’s high time to do so. And among the many other places in the world, being considered as a rapidly growing country, Canada is presently providing a lot of job opportunity to the newcomers.  However, there are some bad cities in Canada too, which is not that much famous for providing a new source of income. Let’s look into a list, from which you will be able to classify among the worst and best job cities in Canada.

Guelph, Ontario with one of the lowest unemployment rate in Canada

Guelph is one of the best cities in Canada that provides a lot of job opportunities to the job seekers. According to the survey, the annual growth rate of population in this town is 1 Percent. On the contrary employment rate that generates every year is almost 72 percent, and the unemployment rate is nearly 3 percent of the total population. This proves that when it comes to Canada, then the best city that provides a lot of job opportunity is Guelph.

Since the industrial revolution, this place has been one of the principal locations in Canada, where all the economic activities of the country used to take place. Still today this old city holds the same charm. Presently the rate of employment is as high as 69.8 percent with a 2 percent annual growth of population.

This is one of the famous places in Canada. This place has been flourished through years to become what it is now. The rate of growth of population at this place is meager that makes the employment rate as high as 66.3 percent.

This is the fashion house of Canada, and thus it generates a lot of services that are related to modeling and fashion designing. Besides this, a place like Toronto provides jobs in its kitchen that makes the overall employment rate as high as 62.6.

When it comes to worst job cities in Canada, then there are very few. Some of them are mentioned below.

Sudbury, a Place in Canada with Highest unemployment Rate

This place has a high unemployment rate compared to other cities of Canada. This place comprises of almost 6.7 percent unemployed people. In Canada, this is the highest rate of unemployment that makes this place not suitable for new job seekers.

Owing to the fact that this place remains covered by snow during most of the time in a year, it deserves a place on the list of worst job cities in Canada. The annual rate of unemployment is 7.7 percent.

The number of worst job cities in Canada is significantly lower compared to other countries of the world. However, being a rapidly growing economy Canada is always ready to provide a new job, new scope and a new hope to begin life.  When you apply for a foreign job make sure that you are applying among the best job cities in Canada.

Related Read- 6 Expert Tips to get Jobs in Canada faster