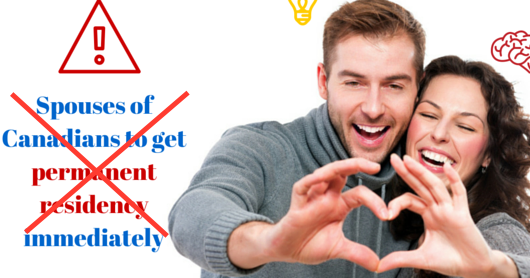 Conditional Permanent Residence Provision for Spouse was instituted in October 2012, by the Government of Canada for the sponsored partners in law or spouses of the permanent residents or citizens of Canada who were in an actual relationship for at least two years with no kids, at the time when they filed for sponsorship.

The main reason for the introduction of this condition was to discourage people who showed fake relationships just to apply for immigration to Canada. Since then, more than hundred thousand partners or spouses have shifted to Canada on the basis of conditional permanent residents.

This disproportion has created problems. As per conditions, if these people in the relationship were not cohabiting for two years, the permanent resident status of the sponsored partner or spouse would be invalidated until recently.

However, this conditional permanent resident provision has been abolished by the Canadian government. This news was announced by the IRCC (Immigration, Refugees, and Citizenship Canada) in April 2017.

Victims Should Come Forward and Report the Abuse

The Canadian Government announced that the reason for this abolishing of the provision was to address the issues that may arise in various cases where the defenseless partners or spouses are forced to remain in an abusive relationship because of fear that their permanent resident status will be revoked. Any kind of abuse, whether sexual, physical, financial or psychological, is anomalous to this conditional permanent resident provision.

In spite of the exceptions to the condition in a situation like this, the victims are either unaware of the facts or are scared to come forward with a perception that they might never be able to prove that they are getting abused.

While most of the relationships are found genuine, and the spouse sponsorship applications are filed with bona fide, there may be some fraud cases of marriage where spouse or partner is victimized. The removal of the conditional permanent resident provision shows the concerns of the government of Canada to tackle domestic violence and encourage gender equality.

The removal of the conditional provision was awaited as IRCC has already mentioned in the Forward Regulatory Plan about the idea of changing the regulation in October 2016 that ‘[change] those provisions with the aim of addressing concerns that have been recognized, such as the vulnerability of sponsored spouses.’

IRCC has mentioned that the elimination of the condition is based on the fact that permanent resident provision was not implemented to encourage the abuse faced by the sponsored spouses.

But since there have been cases of violence where the sponsor or his family are taking advantage of the situation and abusing the vulnerable spouses, IRCC took effective steps and removed the conditions to promote the reconciliation of the family.

For the Spouses or Partners in Abusive Situation

The Canadian Government has declared that abuse is something that would not be accepted. In case, someone is in an abusive situation and is being harassed by a sponsored spouse or their family, then he/she should get all the help they need and should inform the relevant authority.

The ill- treated spouses should not be afraid and should come forward so that these types of abuse cases can be taken care of.