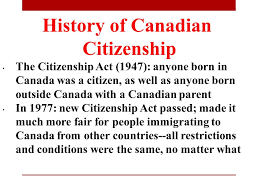 An anomaly is being corrected where the persons born to Canadian Parents outside Canada could not apply for Citizenship before the age of 28 years, may no more lose their citizenship rights

In 2007, the rule was amended again to allow that the children born to Canadian Parents as well as adopted children could straightway become Canadian Citizens without having to go through the Permanent Resident Status

The Problem arose as though in 2009, the law as made in 1977 was rescinded, it was not made effective retrospectively and therefore, those desirous of retaining it were to apply before the age of 28. Those who could not apply were no longer entitled to this benefit.

Most Canadians were not aware of this rule- Another problem that was faced by applicants who wanted to become Canadian citizens by virtue of this rule, was that these laws and its amendments were never publicized and they came to know of it only once they had applied for citizenship. Though Immigration Minister did not comment on this, spokeswoman in his office replied that the concerned applicants were communicated by email, whenever they had applied. But what about those who could not apply before reaching age of 28?

In fact many persons who applied for citizenship after the age of 28 were very rudely advised to leave the country voluntarily lest they would be deported. Hiring an expert lawyer to fight deportation request does not come cheap and not all such affected persons can afford the same

Once a Canadian, always a Canadian rule never applied to them

The problem faced by Canadian Government was it never had the data of such children born abroad or any contact to reach them. Therefore, at this stage, it has no idea about the numbers of people affected by this rule.

Way forward for those affected now- The Immigration Minister Canada has discretionary authority to grant citizenship in “cases of special and unusual hardship”. A spokeswoman in his office when contacted advised such persons to apply to him.