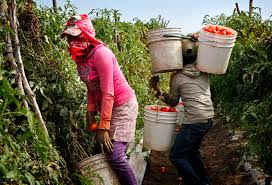 A recent documentary Migrant Dreams exposes the terrible condition of migrant workers; especially who are working in farms.

In 1966, the seasonal agricultural workers program was started by immigrating foreign farmers in Canada. Many countries like United States, Europe, Australia, were all employing immigrant foreign farm workers on temporary basis for supporting agricultural workers. This increased the demand for farmers in Canada as native Canadian labor was not ready to work for lower wages.

The federal government then approached for temporary workers and made agreement with Jamaica and then with Mexico and Caribbean countries, from where workers were hired for a contract period of eight months each year.

Nearly 12 years ago, a film screening was going on, where Min Sook Lee’s National Film Documentary was being screened about migrant workers. This was the most shocking and shared horrible working conditions of labor working in Canadian farms.

Farm workers who were brought to Canada on temporary basis through temporary foreign worker program were facing many problems, and they could not even meet their families since many years. They were also exposed to dangerous chemicals, without proper training, and were regularly threatened of deportation if they ever complained about working conditions.

Such migrant Farm workers, who came from other countries, had no option but to keep their mouth shut for fear of losing job and getting deported despite the problems being faced with their employers. Lee’s documentary on migrant workers, made everyone feel uncomfortable and embarrassing as they could not believe Canada had such conditions and ruthless employers.

Through this documentary, public awareness was raised and many labor rights associations showed interest in helping these workers. Migrant Dreams focused on the workers facing problems and living in inhuman conditions, facing health hazards and living under constant threat of deportation to their country back made Canadian Government think about implementing changes to Temporary workers programs especially being hired to work for such sectors as farming job or for working in extreme climatic conditions where ordinarily a Canadian citizen would not be willing to work and at low wage rate.

Many of these workers owe huge debts to their employers  and even they pay rentals to their employers, even though they don’t stay in their property. many employees had their contract period expired were further being exploited by their employers and they had no option but to work as slaves without any contact with their families.

Awareness about the problems faced by farm workers

Justin Trudeau’s Liberals was elected for suggesting changes and review of Temporary Foreign Worker Program. Till such review is completed and submitted, these workers may not be getting permanent resident status.