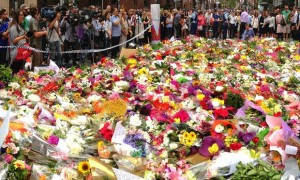 In December 2014, Australia was rudely awakened by the Sydney Siege. Man Haron Monis took around 20 hostages on gun point in Lindt Chocolate Café in Martin Place, Sydney. Man Haron Monis was a loner. He wasn’t taking any commands from anyone, but his act was treated as a terrorist attack and was responded accordingly.

Compared to other terrorist attacks around the world, the death count in the Sydney Siege was very low. But the impact it made on the minds of Australians and people around the world was so great that in all probability, the gunman himself would not have fathomed it.

The experts opine that though his act may not be a terrorist act, it surely was a terrorising act. They believe that he took the extreme step as he had reached a state where he could not continue to lead a normal life with all the run-ins with the law. This act, they say, can be classified as “suicide by police” and it was a clever move by him to get the maximum out of his dire situation.

The instant media coverage and the sentiment that the scenes – where hostages stood with their hands on the glass – evoked was enough to stir not only the nation’s conscience but also push the government to come out with some very tough decisions. Prime Minister Tony Abbott came out and announced stringent immigration measures and also ordered a wide spread security crackdown.

The proposed new plan tries to limit the free run of a prospective terrorist by restricting overseas travel of people with dual citizenship. If needed, their passports could also be revoked. Individuals who are perceived to be a threat to the society may find their welfare payments being blocked.

Warning the citizens that they may have to sacrifice some of their personal freedom for the larger safety and security of the nation, PM Tony came out with a very strong statement saying, “”For too long, we have given those who might be a threat to our country the benefit of the doubt. We will never sacrifice our freedoms in order to defend them, but we will not let our enemies exploit our decency either.” He believes that these new measures will help plug the loopholes in the present system.

This new policy is often termed as the “anti-extremism strategy” and Australia, which had heightened its threat level in September 2014, believes it can prevent an incident like the Sydney Siege from being repeated.