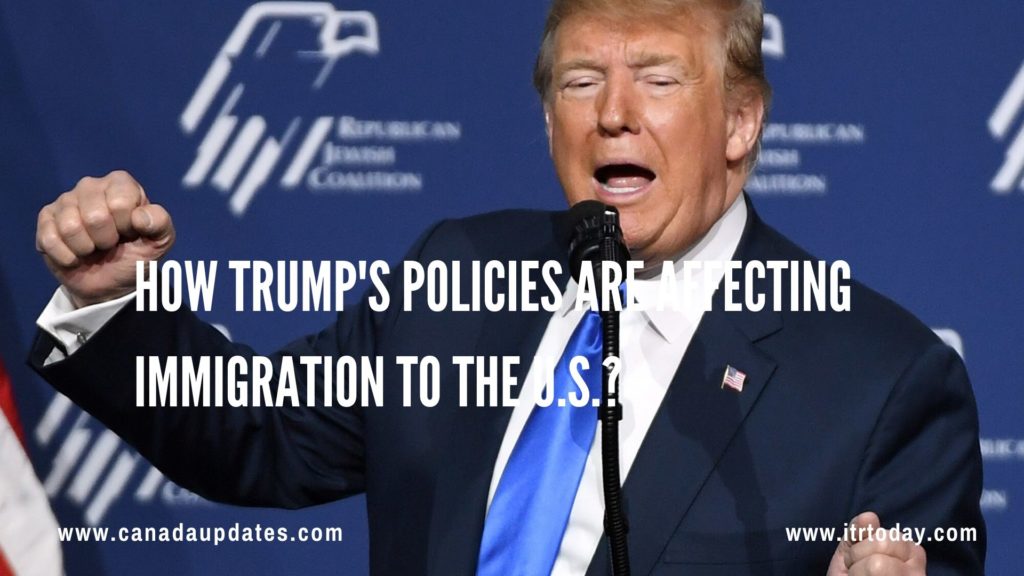 President Donald Trump’s “America First” policy and national security concerns are bent on tightening the noose on both illegal and legal immigration.

Beginning in 2015, Donald Trump took oath as President of the USA. Since then, he has been keen on removing illegal immigrants and restricting even legal entry of foreigners into America.

It has been observed in many of his policies, like the Mexico Wall, opposing the H-1B visas and the travel ban that prohibits granting visas to seven Muslim countries which increased to thirteen in 2020 that he doesn’t want immigrants in America.

Discussions in 30 Seconds hide
1 Which Policies are Affecting the Most?
1.1 #1 Restriction On Legal Immigration
1.2 #2 The Mexico Wall
1.3 #3 Travel Ban
1.4 #3 Reduce the Number of Refugees
1.5 #4 Restrictions On Awarding Green Cards
2 How is the Future Like for Would be Immigrants to USA?
2.1 About Post Author
2.1.1 Shobha Vats

Which Policies are Affecting the Most?

Donald Trump’s immigration policies that affect the immigrants most center around the following areas.

The Donald Trump administration embraced the Reforming American Immigration for a Strong Economy (RAISE) Act in August 2017. The act seeks to reduce the legal immigrants to the U.S. by 50%, reducing the number of Green Cards issued to half.

The bill also imposed a cap of 50,000 refugee admission a year. Economists at Penn Wharton studied and found that the legislation would by 2027 reduce the GDP by 0.7 and cause 1.3 million job losses. Supposedly, it would also curb the diversity visa lottery.

Throughout his campaign, Trump emphasized U.S. Border Security issues and illegal immigration to the U.S. He also promised to complete a wall on the 1,954 mile-long U.S. border with Mexico. He also pledged that he will make Mexico pay for the wall which he couldn’t.

In 2019, he declared a National Emergency to divert defence funds for wall construction.

In 1996, a wall was authorized between San Diego and Tijuana. The George W. Bush administration built 650 miles of the border wall, fencing, and vehicle barrier for which about $2.4 billion were spent between 2007 and 2015.

The wall approximately costs between $15 billion and $25 billion.

Trump issued an order on 27 Jan 2017, banning travel from seven majority-Muslim countries into the U.S. which also barred entry to Syrian refugees.

The order was blocked by federal courts which made him revise the order. In March 217, Trump changed the order, which was also struck down by the federal court. However, it partially went into effect.

In September 2017, Trump issued a third version of the travel ban, which enacted restrictions on travel from the following countries.

i) Chad: Ban on immigrant, business, and tourist visas.

iv) Somalia: Ban on immigrant visas except for family or someone in need of medical care.

vi) Venezuela: Ban on business and tourist visas to government employees and their families.

#3 Reduce the Number of Refugees

In 2017, the Trump administration reduced the number of refugees to 45,000, stating the rationale of saving money.

In 2018, the U.S. Secretary of State Mike Pompeo stated that the United States would reduce the acceptance level of refugees to be allowed into the country to 30,000 for the year 2019.

Three federal court rulings blocked the rule 4 days before it took effect. Under the proposed law, legal immigrants who have received or are likely to need public benefits such as Medicaid, Nutritional Assistance, Temporary Assistance to relevant needy families, Public housing assistance, and Security income for more than a total of twelve months within any 36 months may be classified as a “public charge” and deemed ineligible for permanent residency.

How is the Future Like for Would be Immigrants to USA?

President Donald Trump’s “America First” policy and national security concerns are bent on tightening the noose on both illegal and legal immigration.

Good or bad, where do the new policies stand for the country is really up for debate, but these policies are affecting immigration to the U.S.