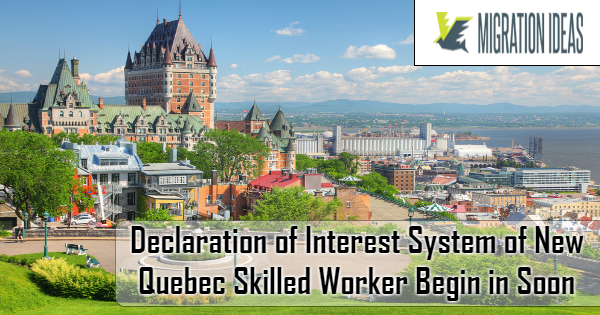 Quebec, one of the major provinces in Canada, has recently made an announcement on the new declaration of interest system for the economic immigration. These new changes are said to be made from August 2, 2018. This date, however, is the same when the higher investment requirements for the for the Quebec Immigrant Investor Program will come into effect.

The new rules set for the interest system has been approved by the higher authority of the immigration department in Quebec. These new rules were announced by the provincial Immigration Minister, David Heurtel.

The provincial Immigration Minister stated that this new system is similar to that of the federal Express Entry System. And according to him, these new rules will make the Quebec immigration program more modern, effective and highly efficient.

The new interest system rules have also made the application process easier for the immigrants, as the processing time would take just 12 months from now onwards. According to the Minister, these changes are going to be proved revolutionary and it will give priority to skilled workers who have been able to meet the basic requirements that come under the labor market in Quebec.

The Process Required for the New Quebec Declaration of Interest System

From August 2, 2018, the new Quebec Immigrant Investor Program will also come into effect. In this new program, the investment requirement of $800,000 will go up to $1.2 million and the qualifying net worth will increase from $1.6 million to $2 million.

The New Requirements for the Investor Program

Here are the new requirements for the investor program –

Quebec has all control over its immigration system. And it also has the power to set their own immigration levels independently from the rest of Canada.

Since 2016, the Quebec immigration program has not accepted any immigration applicants. However, with this new declaration of interest system, Quebec is all set to welcome near about 30,000 immigrant skilled workers every year.