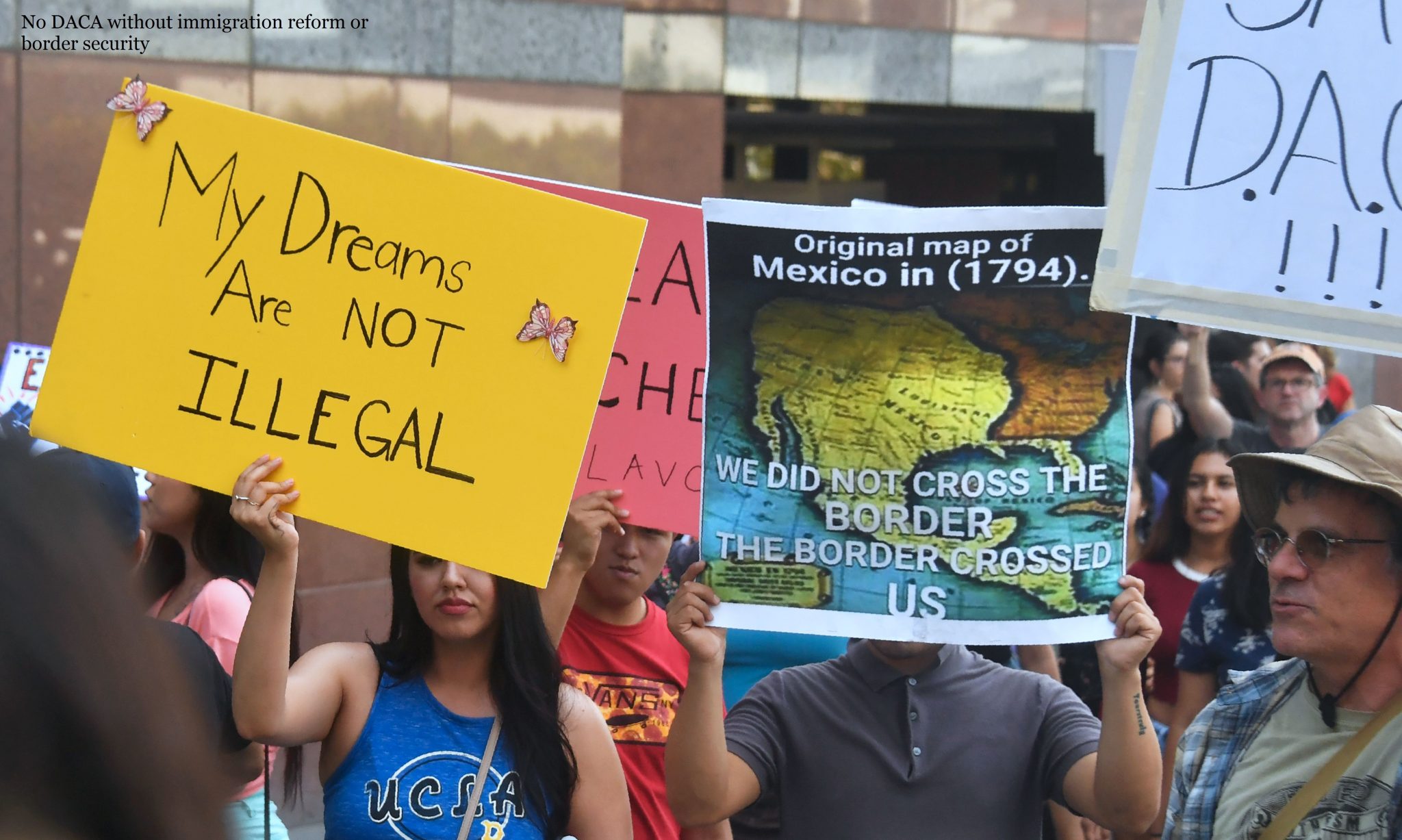 A map of Mexico as it was in 1794 is displayed as young immigrants and their supporters rally in support of Deferred Action for Childhood Arrivals (DACA) in Los Angeles, California on September 1, 2017. A decision is expected in coming days on whether US President Trump will end the program by his predecessor, former President Obama, on DACA which has protected some 800,000 undocumented immigrants, also known as Dreamers, since 2012. / AFP PHOTO / FREDERIC J. BROWN (Photo credit should read FREDERIC J. BROWN/AFP/Getty Images)

Deferred Action for Childhood Arrivals (DACA), on the actions of President Donald Trump, several moderate Republican U.S. House members are forcing a petition to vote on DACA. President’s willingness to agree on DACA depends on the final deal to secure the borders. This is possible only when if there is an end to diversity visa lottery program, implement e-verify, hiring more immigration judges, Border patrol, and ICE agents. Presidents in his State of the Union Address, set forth these pillars for immigration reform, which includes the end to “chain migration” where one person of a family can bring endless people of his family. Know further why No DACA without immigration reform or border security? 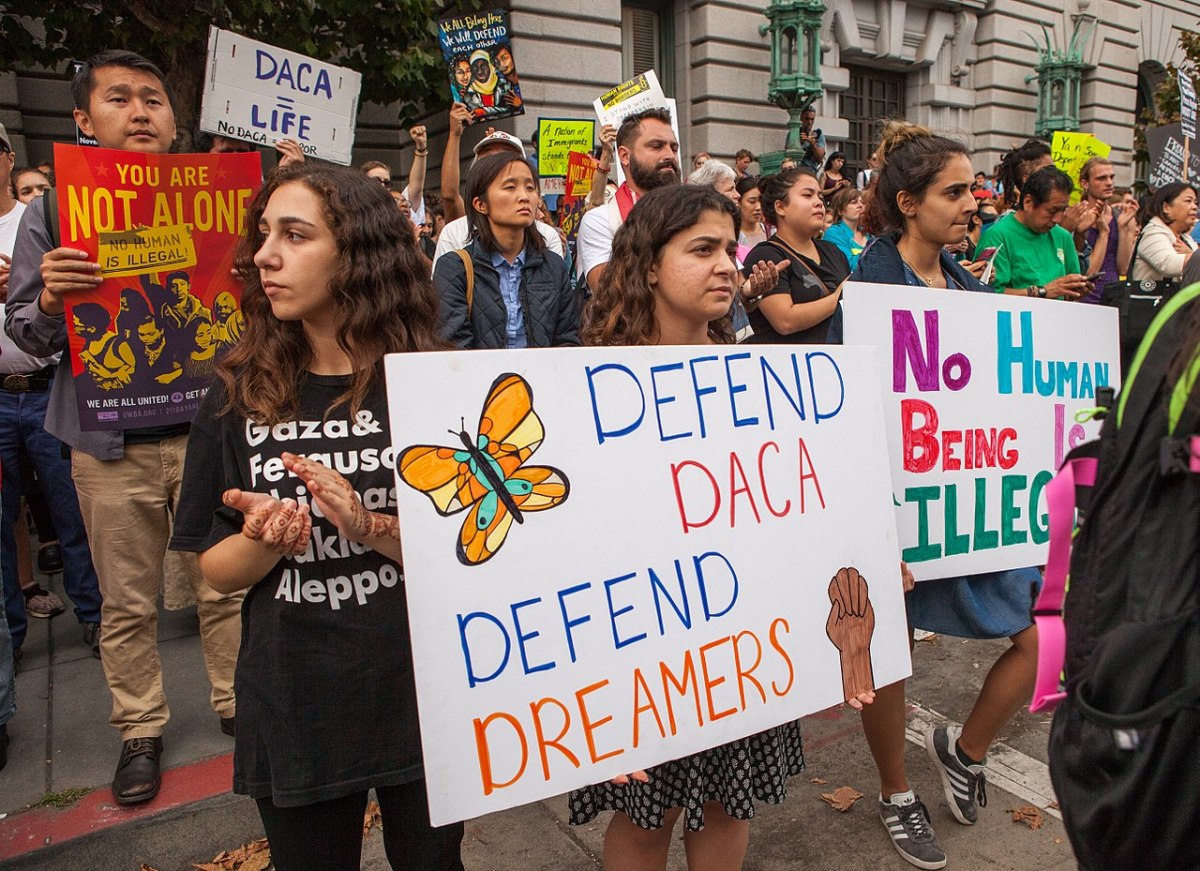 Deferred Action for Childhood Arrivals (DACA) is an American immigration policy that allows the individuals who were brought to the USA illegally when they are children, this policy gives them a 2 year period of deferred action from deportation and can apply for the work visa in the USA. It is different from the proposed DREAM Act, it doesn’t give them the pathway for the citizenship.

On back June 15, 2012, President Barack Obama announced this policy and to its immediate actions, U.S. Citizenship and Immigration Services (USCIS) started accepting applications for the same on August 15, 2012.

In November 2014, Obama proposed to expand DACA and cover more illegal immigrants under it, it was opposed by many states but ultimately blocked by the courts. On June 16, 2017, the expansion was again revoked by The United States Department of Homeland Security, while questioning the existence of DACA as a whole. Complete eradication of the DACA program is initiated by Donald Trump as soon as he becomes president, on September 5, 2017, he allows Congress 6 months to pass original dream act, which would provide citizenship to the dreamers.

The point here is, the president can neither waive the immigration law nor can make it out of thin air. If the petition gets signed by the 25 Republican House colleagues and with the support of all the House Democrats a vote will be forced, and, DACA would be passed but without fixing the border security issues. Passing the DACA will invite the amnesty of 3.5 million illegal immigrants as this will hold their citizenship and moreover without border security, many of the illegal immigrants can enter the US illegally.

American who voted for the Republican majority are mostly disappointed

Without border security clearing DACA not only alienate House Republicans but also the majority of Americans who voted in favor of Republican. Approximately around $125 billion of the taxpayer’s money goes for the welfare of the illegal immigrants, which can’t be tolerated by the American people voted for a Republican majority to once and for all.

With the lack of the congress intervention, President Trump tries to fix the situation by passing executive orders which results differently. The liberal courts in their full capacity try to block these attempts, such as restriction on the entry of the refugees from the countries hit by terrorism.

These executive orders are valuable because only because of these, in the absence of the Congress, can prevent Americans from the terrorists. Congress must act because there are many of the bills which are made to fix these problems but can’t be voted on.

Many of the Republican House members represent marginal Republican districts and they don’t push the discharge petition they will face the tough elections. Maybe passing the DACA bill is the only hope for them but it will create anger and resentment in American who voted for the Republican majority and hoping the president will stand by his promise to uphold immigration laws and border security. The majority in coming November is questionable if the trust of these voters is gone, resulting in the resumption of the open borders, and end to border security initiative.

Addressing DACA while failing to secure borders could destroy the country’s integrity. No nation can be sovereign without secure borders, an orderly immigration policy, and the rule of law.