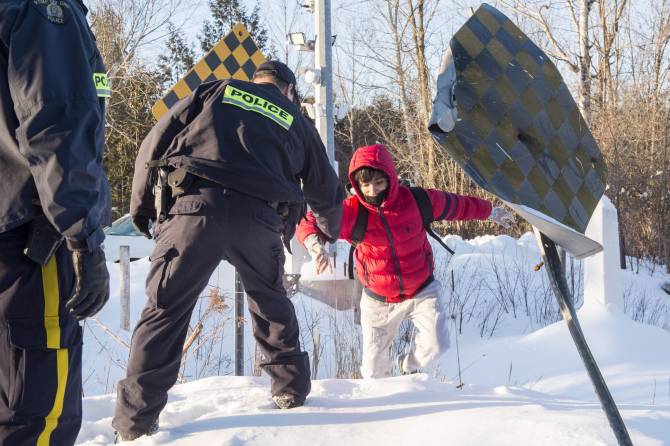 Family members from Somalia are escorted by RCMP officers after crossing the U.S.-Canada border

The Government of Canada places the Quebec problems for help in order to cope up with the growing influx of The Asylum seekers across the United States. According to the officials, the problems are exactly reaching its saturation point.

As per the statement provided by the Federal government, the Quebec breakdown cost will be reviewed because around 1000 of refugee claimants have arrived looking for social support and housing.

According to Canada, it will work to ensure that the newcomers are diverted away from Montreal, which is the Quebec’s largest city to various other regions that are better equipped for welcoming them.

David Heurtel, the Quebec immigration minister told the reporters that Quebec is at its maximum saturation point. The provincial and Federal officials met and a decision has been taken regarding the steps to support the province.

As per the reports, in the last 15 months, more than 26000 individuals have crossed the US Canada border in an illegal way to file the refugee claims in Canada. This is no doubt that there is a vast rise in departure as compared to the previous years when so few individuals crossed the border that the government did not keep the track.

Discussions in 30 Seconds hide
1 Large influx of refugees has worsened the backlog of refugee application processing rate in Canada
2 Toronto- the largest city of Canada is also at Saturation Point due to large Influx of Refugees
2.1 About Post Author
2.1.1 Raima Sen

The sudden influx has strained the refugee system of Canada as well as worsen the backlogs in the refugee tribunals, leading the aid agencies scrambling.

The total number of individuals who have crossed the border picked at 5,712 in the month of August 2017 and it dropped a bit over the winter season. But with the recent Canadian police interception, the number has again picked up. Within just 3 and half months of 2018, the number has crossed 6,373.

Most of these Refugee claimants have crossed into the primarily French-speaking Quebec province where the high influx has led to spark the political tension in the election year as well as backlash from the anti-immigrant groups.

The Federal government tries to ease down the pressure on the Quebec City but it has to find places where the individuals can be sent. In fact, Toronto which is known as the largest city in Canada is also at its saturation point due to the influx of Refugee claimants.

At the same time, the government needs to determine the travel policy for Refugee claimants as well as the Asylum seekers. According to Mathieu Generated, the spokesman for the federal immigration and Ahmed Hussen, the Refugee minister, it is not possible to tell people where they should go.

According to Heurtel, the steps taken were in the right direction.

The recent arrivals include Nigerian people and many of them carry valid US visas. According to Mr. Genest, they were using the US visas as their transit point. He further said that the Canadian officials have always been in touch with their U.S. counterparts.

If an individual is using the United States as the conduit in order to get to Canada, it directly applies that he is not using the visa for what it actually intends for.