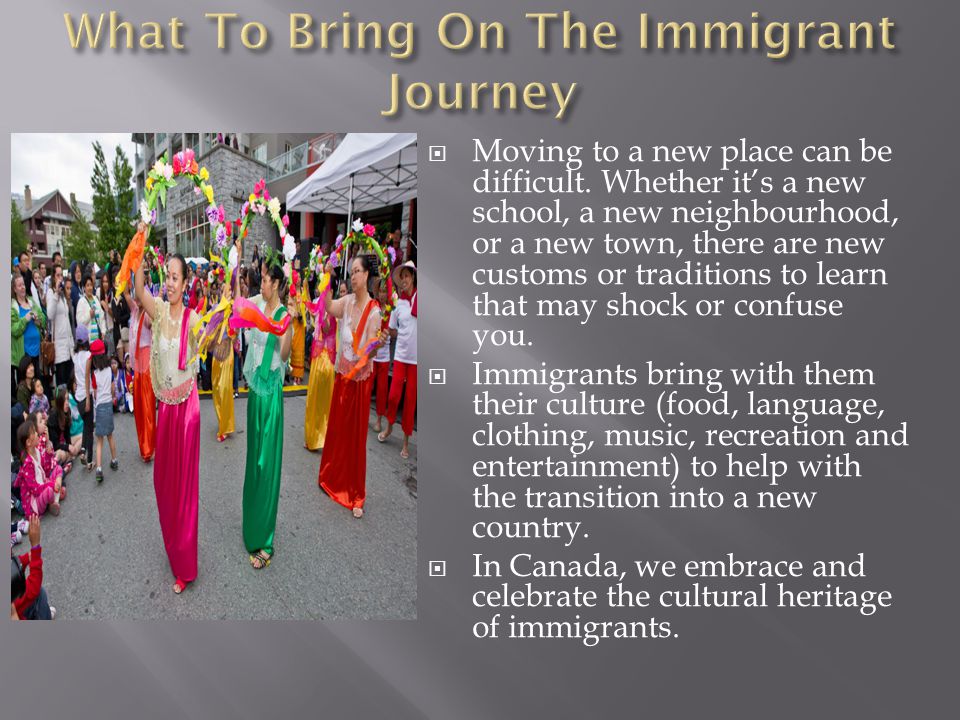 New Immigrants to Canada: Don’t Abandon Your Traditions and Languages

One of my earliest childhood memories was in kindergarten, when my teacher asked everyone in the class what they had for breakfast. When she came to me, I told a white lie and said I’d eaten a banana. I’d actually eaten “jook”, a common Chinese dish which might be likened to congee or porridge in the West. I wasn’t embarrassed by my traditional breakfast, I just said banana because I had absolutely no idea what “jook” was in English.

My parents immigrated to Canada about 40 years ago. When my brother and I were born, Cantonese (my parents’ native language) was spoken quite a bit at home and Chinese traditions were celebrated. I’m not sure if they did it consciously or not, but my parents also embraced Western holidays and traditions, like Christmas, just as much as they did traditional Chinese staples, like Chinese New Year. And I’m glad they did.

Adjusting between languages and cultures may seem difficult at times for kids, but it’s nothing to be embarrassed about, and it will only enrich their lives.Finding the balance of the two cultures was paramount in my upbringing, and I plan to use it as a guide for raising my own child now.

To be honest, my Chinese is not up to the level it should/could be.I took 8 years of Chinese school, but I didn’t really practice it at home with my parents as much as I should have. Although I can understand it perfectly, I struggle with the grammar. Children of immigrants might be resistant to speaking their parents’ mother tongue at home, but don’t let that slide. There’s no doubt in my mind that knowing multiple languages can only benefit children—especially when it comes to career opportunities later on in life. Countries which seemed closed off or under developed when I was a child, like China and India, are now burgeoning with economic opportunities for Westerners that can communicate well with them.

Aside from the positive impact it would have on my own life, another reason my parents wanted me to become fluent (or at least good enough) in Cantonese was so I could translate complex Englishfor them. The language barrier wasn’t a huge deal when they first arrived in Canada, because they learned spoken English well enough in their jobs as customer service agents. But as the internet age arrived, many daily face-to-face interactions were transformed into text, and they relied on my brother and me to explain some advanced written Englishto them in Cantonese. Explaining the details of banking in Canada can be tough in another language, but it was a small price to pay to the people that raised me.

Rapid changes in technology have been difficult for my parents to acclimate to, which is usually the case for anyone who is aging, immigrant or not. But other cultural changes that Canada has experienced since my parents immigrated have actually made it easier for them (and for any immigrant) to live here.

Canada is much more multicultural today than it was when I was growing up. It doesn’t matter where you’re from, there’s a good chance that your traditions will be celebrated across the country. Chinese New Year, Eid, Diwali, it’s all celebrated – even by people who are of different faiths and ethnicities.

Best of all, the education system has changed dramatically since the time I was a student. Multiple languages are now taught in public school or offered after class. There’s also websites, apps, and programs dedicated to learning new languages, so you could argue that kids today have more ways to practice their language skills than they ever had before. But no app or curriculum, no matter how sophisticated, is a match for the direct exposure kids get when they learn another language and culture at home. I may have made the mistake of not becoming fluent in another language, but I plan on encouraging my daughter to learn any language she’s interested in. All the better if she wants to practice Cantonese with grandma and grandpa.

I’m sure you already know that Canada is a diverse country. What makes it so great are the people like you. Get out there, and hold onto the old country with one hand while embracing the new with the other.