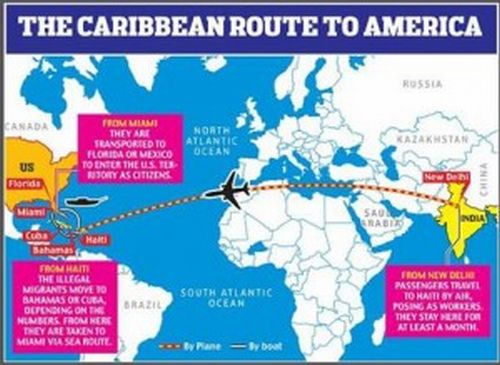 Over the period of time, Immigrants have discovered many illegal routes of Immigrating to USA

It has been a long time since migrants from different countries like Canada, Middle East and Africa are involved in entering USA in illegal methods. The surprising fact is that the USA is taking legal refugees per year around 70,000 to 110,000 from various countries. All these numbers become dissatisfactory for the migrants and this paves the way for illegal Immigration to USA. Over the period of time, Immigrants who otherwise do not qualify for immigrating to USA, have discovered many routes for entry into USA also known as Illegal routes of Immigrating to USA

Discussions in 30 Seconds hide
1 What Are Various Illegal Routes of Immigrating to USA?
1.1 Reaching Mexico visa Latin America and then entering USA
1.2 First Overstaying the Visitor Visa, Getting Temporary Stay and then Claiming Citizenship to USA
1.3 Entering USA via Haiti and then Mexico before entering in USA
1.3.1 Related Read- Caught for Illegal Entry in to USA- Hire an expert Attorney to escape deportation
1.4 About Post Author
1.4.1 Raima Sen

What Are Various Illegal Routes of Immigrating to USA?

There are several routes that are popular among immigrants as illegal routes of Immigrating to USA. The Mexico Government provides the 20-day cost-free pass to such migrants to the U.S border. Migrants prefer to go through Latin America to reach Mexico and then it becomes convenient to enter USA. Some of the migrants from Africa travel to Ecuador and Brazil because in these countries visa restrictions are less, which makes an entry to the USA. The most popular way is to enter the USA via Mexico-US border.

First Overstaying the Visitor Visa, Getting Temporary Stay and then Claiming Citizenship to USA

Some of the people get the visitor visa of USA. Though they get an official visa of the USA, they overstay the visa and go underground. This is a popular route for illegal Immigration in USA. Some of the people opt for marrying a USA citizen to get citizenship of the country. This can be considered one of the easiest ways to enter USA. Maximum settle for smuggling purpose. In maximum cases, such illegal immigrants, especially from Canada are never deported. They get permission for the temporary stay but after some years they demand of staying by claiming that they have been there for years and have their respective jobs and families.

In most of the cases, it takes a long while. It can be years too. If one does not sign an agreement of his deportation, does not have a prior order for removal and if he does not depart voluntarily, then the person will not be deported from the country. It is so because he is caught. This has been in action for a long time and many have also been caught.

Entering USA via Haiti and then Mexico before entering in USA

Indian agents who are involved in smuggling enter into the US for the ‘Big American Dream’ has found a new route. A confidential government report reveals that illegal immigrants from India are now being taken to the US via Haiti, instead of the earlier Guatemala-Mexico route. Till 2012, agents in India used to route illegal migrants to the US via Guatemala, from where they tried to cross the border to reach Mexico and then into US. But after that route was busted by the Delhi Police, these agents have been increasingly using the Haiti route. The report reveals that the route which has been in operation for over six months now and was initially used by Delhi-based agents is now being used by smugglers in other cities as well.