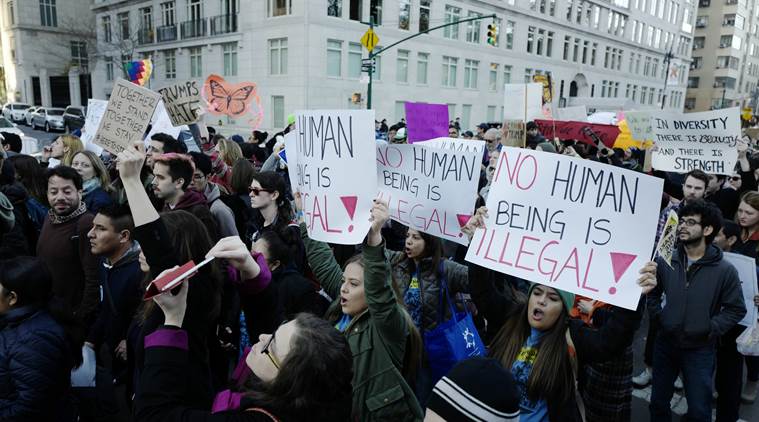 Immigrants Begins A "Day Without Immigrants" To Protest Against Trump's Ban

Most of the potential shops, retailers, and restaurants of the United States as the major communities of the immigrant workers have decided to boycott their work on Thursday to observe a “Day Without Immigrants.” The program has been targeted as a harsh answer to Donald Trump’s hard executive orders on immigration issues.

The overseas communities from the major cities of the country like Washington, D.C., Philadelphia, Austin, Texas, and others have decided to stay back home from work and school as part of their protest against new U.S, President’s strict regulations against those of immigrants. The communities have also urged all the legal overseas citizens of the country alongside those of the undocumented ones to join in this strike.

The boycott has been planned by them as a protest against Donald Trump’s initiatives to crackdown massive immigration in the country. The initiative includes his various plans like building a wall at the US- Mexico borders, imposing an immigration ban on seven Muslim-majority countries, which involves a suspension order of all refugees from those nations to enter the US and debarring Syrians from the country.

A “Day Without Immigrants” Program

After the announcement of “Day Without Immigrants” program made by the immigrant communities of the US, mixed impressions have been reported from different parts of the country. Several restaurants have already declared it as closing day as the majority of their employees belong to these communities. Several school officials of New Mexico are also worried about a hundred or even more absentees in their schools as well.

Well known Spanish-American Chef Jose Andrés, who is facing a lawsuit against Trump after pulling out of a restaurant deal at Donald Trump’s new Washington, D.C., hotel over offensive comments Trump made about Mexican immigrants, also planned to join “Day Without Immigrants” program. He also decided to shut down his Food chain in Washington D.C. on the said date after a hundred of his employees asked him to stand with them.

He said, “We are all one,” also adding “We should not be fighting among each other, we should all be working together to keep moving the country forward.” Much praised Chef Silvana Salcido Esparza also announced the official closure of her three restaurants based in Phoenix. The Sweetgreen salad chain, Busboys & Poets alongside a bunch of other renowned food chains have also decided to stay with the immigrants in this demonstration.

All the immigrant communities, participating in this “Day Without Immigrants”, have also planned a march to the White House on that day at noon. Meanwhile, the Davis Museum at Wellesley College in Massachusetts has already stated that all artworks created or given by immigrants to the museum would be removed through February 21, 2017. The above mentioned executive orders have been temporarily suspended while an appeal court weighs whether it will lift the ban or not.

Also Read: An Overview On The Trump’s Execution Process On Immigration Ban Policy