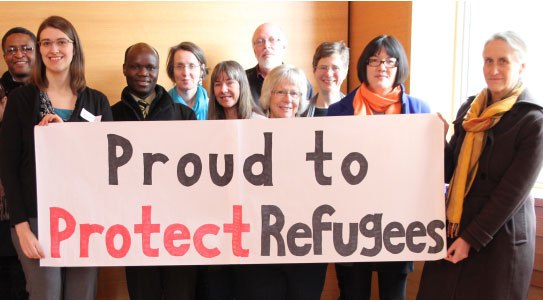 Donald Trump has had focused much of its pre-poll campaign on the points of border management of the US. After being sworn as the president of the United States he is trying to live up to his promises and turn them in to reality. Trump took the charge to impose strict regulation to control immigration in the country and stretch tight regulations for refugee immigrants.

The number of refugees in this largest lake based region also include those coming from the seven above mentioned Muslim major countries. Donald Trump’s executive order has already set a sense of fear of deportation to the countries from where they actually hail. Many of them have begun fleeing to Canada, illegally immigrating to a small Manitoba town, Emerson, which is just across the border to claim refugee status.

The road to this route is pretty risky and complicated in the manner to survive. Boasted with the hard surface of the snow, the path is known to be located in a region marked by freezing winter weather. According to experts, passing through this chilling area may cause diseases and can even pose life threatening risk. Still, the reports that thousands of illegal immigrants crossing US borders by that route are coming through.

When asked about the tensions among those who are entering Canada through this route, a person named Badal Maclin Mohamed, who originally belongs from Somalia, said this risk is worth of taking in this situation for all refugee immigrants like him.

He added that he was mentally prepared to take up this much risk to avoid any chances of being deported to his native land where his father was killed by the violent militants from the Islamic extremist group al Shabaab.

However, as per reports, the US government is expected to impose more border security measures after the reports of this massive illegal border crossing came to their attention. Although, the Manitoba Interfaith Immigration Council is expecting more refugees to come to Canada by this route. A representative of this organization recently stated that they are preparing for more arrivals through from Minnesota in the coming months.