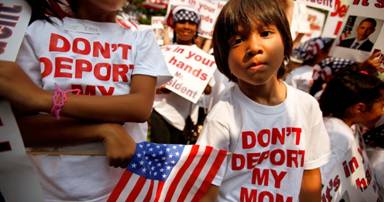 Discussions in 30 Seconds hide
1 The Fear of Deportation from America is not just scaring adults but also their children.
1.1 Immigrants are living the life of prisoners
1.2 Deferred Action for Childhood Arrivals
1.3 About Post Author
1.3.1 Raima Sen

The Fear of Deportation from America is not just scaring adults but also their children.

The post-election era has been shadowed for those living in America without legal documentation, and Trump’s anti-immigrant sentiment is a nightmare for those who were still shielded by Obama’s administration. In areas heavily populated with illegal immigrants, activists are undertaking awareness campaigns to help immigrants hounded by fear of deportation to protect themselves from being deported

Immigrants are living the life of prisoners

The Redlands Christian Migrant Association (RCMA) has run educational centers for underprivileged farm workers’ kids since 1981, and though they have a capacity of enrolling 1700 children, the numbers have massively reduced post the election to 974 children. In the 25 centers across South Florida, RCMA has seen a 45% reduction in the number of students under the age of 5. Immigrants are not able to live a free liberal life, they have stopped visiting parks and churches, reduced other outdoor activities like shopping and festive celebrations due to the fear of deportation.

Deferred Action for Childhood Arrivals (DACA) is a program that lets young adults get work permits, social security numbers, and prevents them from being deported. This program benefits 741,000 immigrants across the nation and was launched by President Barrack Obama in his presidential tenure.

Undocumented Immigrants even shy of travelling for fear of deportation-Trump has vowed to bring down all such programs and target every single illegal immigrant out of the country in his campaigns and the fear that he will live up to his promises has shattered the livelihood of a large number of people. The simple fear of being pulled over by a cop is preventing people from travelling across states. May be the cop pulls you over for a broken taillight or a routine checkup, but most immigrants do no possess a driver’s license as they are immigrants, and this small incident can be the reason of their deportation.

Other situations include a 40-year old woman who has migrated from Mexico three decades ago, and has two children. Her young daughter is a working adult now, and can surely sponsor her mother to stay in the country, however she is afraid that she might have to apply for the permanent residency through Mexico, and would have to leave her teenage son behind, with a risk of her application being rejected is still difficult for her to comprehend and make up her mind.

All this time, immigrants were comfortable with being illegal citizens of America, as they were not looked upon as a threat. Even if they are illegal immigrants, the police and the law were still aware of their numbers and existence, and the fact that NGOs were helping them in spite of the legislation made them feel safe, secure and welcomed.

However, with the new president who sees illegal immigrants as a threat, people have started questioning their very existence and are living in fear. The children of poor immigrants have to face so many obstacles to just receive a basic education and earn the means to survive, but this fear of deportation is an added burden they have to face every single day now.

Read- Is hiring an immigration attorney solution for undocumented immigrants at this point of time?

What is your take- Undocumented immigrants have stopped travelling for fear of getting deported and their kids have stopped going to school. Are their fears justified? Would Trump be as harsh as made out to be? Share your comments below