Yes. Canada has made this announcement in a latest move. 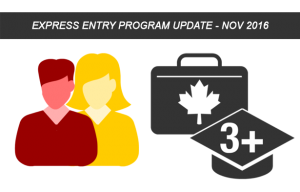 Several changes to CRS(Comprehensive Ranking System) and Express Entry system have been announced. These include introduction of points for Canada post-secondary educational credentials, changes to allocation of points for qualifying job offers and extension of application submission period after an ITA(Invitation to Apply) is received.

Since the changes announced on 19th November, 2016, several candidates in Express Entry pool shall be allowed to update their score.

Invitation rounds shall be starting again in the next couple of weeks, stated IRCC. This shall give sufficient time to those affected by the latest changes for updating their Express Entry profile. All CRS scores shall get updates before the beginning of the next invitation round.

Candidates who are not affected by the changes to Express Entry system need not do anything, clarified IRCC.

Significance of updating your profile—Well, not updating one’s profile leaves the candidate at risk of missing on an ITA in the next draw. Nearly 50 percent of all individuals invited to apply till now possess a qualifying job offer.

As of now, job offers are getting fewer points. So, candidates in the Express Entry pool without any job offer can find themselves in a better position for getting an ITA.

In addition, a provincial nomination is the most valuable factor in Canada Express Entry system. 600 points are offered for a nomination certificate from a PNP(Provincial Nominee Program).

Major Setback For U.S Citizens Married To Undocumented Immigrants; Is There A Way Out? 3 min read

Major Setback For U.S Citizens Married To Undocumented Immigrants; Is There A Way Out?

Migrating to the United States? Is the US citizenship worth all the wait and money? 3 min read

Migrating to the United States? Is the US citizenship worth all the wait and money?

Unwanted Migrants in Denmark being planned to send to deserted Island! 3 min read

Unwanted Migrants in Denmark being planned to send to deserted Island!