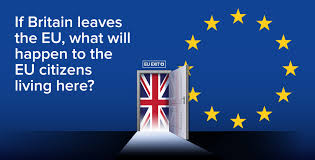 UK Prime Minister Theresa May has stated that EU nationals will not be deported from Britain post Brexit following advice by Home Office that such move would not be able to sustain scrutiny of law.

Existing UK laws don’t allow deportation once a EU national has completed 5 years of stay in UK-As per UK laws, any resident of EU country staying in UK for more than 5 years gets permanent residency rights. Earlier Theresa May had indicated that post Brexit immigrants from EU countries would be deported. Liam Fox, the International Trade Secretary, too had said last week that the status of EU nationals living in Britain cannot be guaranteed.

By 2019, by when the Brexit would be completed, an estimated number of 2.8 Millions of EU Nationals would have completed the requisite period of stay in UK

About 80% or to say 2.8Million immigrants from EU would have residency rights by end of 2019, by when the Brexit is expected to be completed. The balance immigrants may be granted an amnesty to allow them to stay permanently in Britain. Cutoff date for immigrants having arrived in UK and the modalities of the amnesty scheme are likely to be announced soon. However, it would be provided that the UK national would also have similar reciprocal right to stay in that country.

Critics of such amnesty plan argue that such a plan may trigger large scale immigration from EU countries to Britain. Plans as to how the Identification of EU nationals would be done of having stayed in UK for requisite period are also yet to be finalized.