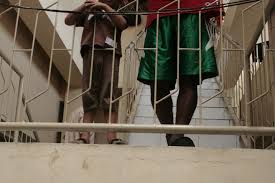 We understand that any nation would like to control who comes in and why. But a civilized country like Canada, whom the whole world looks forward to, should have more civilized and humane ways to detain the immigrants till conclusion of their appeals or legal process to deport them

In Case of Syrian refugees, Canada demonstrated to whole world how it is coming forward to to help people who are already in dire stress and their Canada has come forward to ensure that it minimizes their sufferings to the extent it can.

Many Children who are not lucky to have any relative take care of them are lodged n Child welfare homes, where the condition is equally worse

As one psychiatrist who had a chance to meet the Canadian born children to undocumented immigrants describes that how tears rolled down his cheeks and his job could not insulate him as he saw the pain and suffering of the children separated from their parent. The parents were taken handcuffed as the frightened girls watched in front of their relatives. Despite the relatives trying to convince little girls, the girls could sense something wrong happening to their parents

As the Canadian law stands, the Canadian borne children cannot be deported or held in detention centers while parents are taken away to immigration jails or detention centers. The children, who are not so lucky to have any relative to care for them, are sent to child welfare homes. The condition at these detention centers is so pathetic that many detainees when interviewed hared how they contemplate suicide on various occasions but as they worried about the condition of their children and some hope keeps them alive.

Impact on mental health of children- As the children of such detainees pass through traumatic experience, they soon develop signs of depression, anxiety, lose their appetite. More so as they develop some guilt syndrome that they are not being able to be of any help to their parents.

The condition of the children who decide to stay along with their parents is no better. It is high time that Canada sets to realize the psychological realities of immigration detention for children and families.

Inhumane conditions at Immigration Detention Centers– Most of the detention centers have inhumane conditions with some not even been able to provide proper healthy food to the detainees. The blame is attributed to low budget that the government is able to provide for such centers. It is high time that the flawed system of detention centers and the conditions therein are improved and made more humane. The deportation, in cases where it is to happen should happen faster and avoid the detainees suffer in dark cells for want to speedy trials.

Not only the legal fraternity and human rights activists have joined in asking for improved detention facilities. The voices are now also being endorsed by members of Canadian Pediatric Society also.
Legal Help– If any of your relative or known one has been held at such detention center, do seek good legal help to end his suffering and pain. A good immigration consultant can guide you for any such experienced attorney who can help represent case against deportation