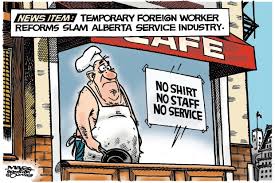 From EDMONTON, ALBERTA:  It was during the month of march, last year, Gil McGowan, the honorable President for the  Alberta Federation of Labor,  expressed his views during the temporary foreign workers rally that was held at the famous restaurant of Panciteria De Manila. Temporary foreign worker program for Canada can possibly open the doors to only the Canadian workers abuse, as per the president’s opinion expressed during the speech.

It was only during the closed doors consultation that happened during the immigration, john McCollum, the immigration minister revealed that there are going to be liberal rules regarding the temporary foreign worker program, sooner.

Impact on Labor Market-Impact in the labor market bas to be assessed better, was the opinion expressed by the minister during the speech. Loosening the regulations and norms is the idea, which is soon to be implemented, as per the revealing from McCollum.

There must be steps shown in the very first place that there were approaches made already to fill the vacancies with the local Canadians on priority. Still, this rule is eliminated if the hiring is meant for those who are highly skilled in the technical cadres. It was also levied equal emphasis for the service sector laborers too, from only certain other major parts of the Canadian dominion. Mountain parks in Alberta were to be mentioned with key emphasis there, as per McGowan.

Removing the need for the labor market assessments, can lead to laborers abuse over a period. There are potential chances for a few employers to drop down the wages, by far. There are possibilities for some employers to shirk the responsibilities instead of hiring and training the local Canadians.

“That was actually what is already witnessed earlier during the Harper government,” revealed McGowan.

This is what that had created the public backlash too. Liberals must not be sleep walking again into the same quagmire too. Safeguarding the interests of the commons is one something that is to be taken into consideration with paramount importance, said McGowan.

Now we can say Canada to be one of the most aging countries in the world. Fresh blood with energy is pivotal need. Nationals are not having enough babies. Labor force growth is largely dependent on this particular aspect. That has to influence the immigrants’ entry and the temporary foreign worker program as well. This was the opinion of McCallum.