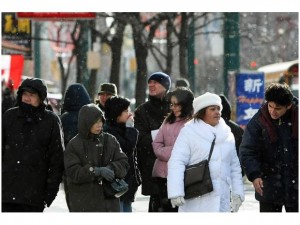 Mr Andrew Griffith, former Director-General, reveals that the recent reforms in citizenship policies are a major reason behind this drop. The toughening of policies has forced immigrants to disengage themselves from public life and lose their identity in the process.

The study had calculated a period of 6 years for an immigrant to become a citizen. According to this time period, the 2008 data reveals the direct impact of these new policies introduced by the government for the immigrants.

But Citizenship and Immigration Canada (CIC) spokesperson Johanne Nadeau countered Andrew’s claims by saying that Canada has the world’s highest naturalization rates. She says that “86% of eligible permanent residents for Canadian citizenship decide to acquire it”. She also argues that Andrew is misrepresenting the facts as his study does not take “into account those (permanent residents) who are not yet eligible to become citizens because they haven’t met all of the requirements needed to begin the citizenship process”.

The Burden of Money and Marks

The tougher citizenship tests were introduced in the year 2010. The raising of the pass percentage to 75% only made it harder. These tests are designed to measure the applicants’ knowledge of the Canadian history and culture. After the new tests were introduced Caribbean immigrants had their percentages fall by 20%, while there was a 15% decline in the percentage of other Asian communities.

Andrew reveals that till recently most of the non-European immigrants found the education criteria as the most difficult part of the process, but the Conservative government has managed to add to the burden by increasing the application fees. In Ottawa the fees was raised twice in the last year. From a $100, it is has become $530 in December. And candidates who get through have to pay an additional $100 to complete their citizenship process. An expense of close to $600 is quite some amount for immigrants of certain poorer communities or families.

“When you make it more difficult for some communities to become citizens, you are going to create issues with their engagement, attachment and identity of Canada,” said Andrew.